The Madonna of Guadalupe

December 12 marks the feast day of the Madonna of Guadalupe, and the first visitations of Our Lady to the New World.

My birthday falls on December 12, and every year I delight anew in the date, because it also marks the feast day of the Madonna of Guadalupe, and the first visitations of Our Lady to the New World.

Although not an angel, she is called the Queen of Angels, and is revered by millions throughout Latin America and the American Southwest, where you can buy everything from candles or T-shirts to mugs and blankets with her sacred image.

Is the story true? Did it really happen? 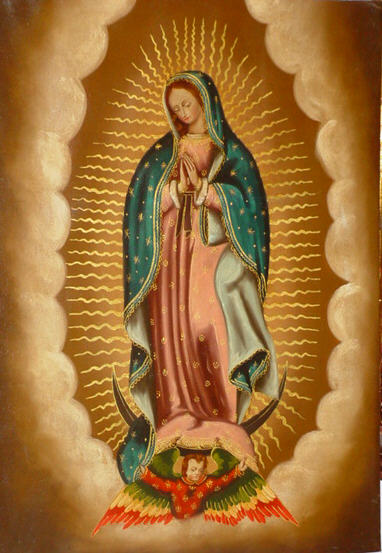 On December 9, 1531, a young Indian Juan Diaz was walking in Tepeyac, toward Mexico City, to get help for his sick uncle. Suddenly the Madonna appeared, surrounded by spears of light. She told him to tell the Bishop she wanted him to build a cathedral at that site.

But how can a lowly Indian peasant approach a Prince of the Church, resplendent in finery, riding high above the crowds in carriages, surrounded in his palace by servants and guards? You might as tell a derelict to go knock on the door of the White House!

According to one story, Juan didn’t go. The next day Our Lady came again and once more directed him to see the Bishop. This time he spent all day in the anteroom, only to be turned away. In her last appearance, on December 12, the Madonna gave him an armful of roses to present to the Bishop. Take them, she said. The message would be heard.

This time the Bishop received him. Juan told of his vision and the Madonna’s request for a cathedral, and then he opened his cloak and let fall the roses, and there on the fragile fabric of his peasant’s cloak or tilma, was inscribed the miracle, a full-color image of the Madonna, as she had appeared to him.

Today the tilma is on display in the Basilica in Mexico City in an area darkened against destructive light. Huge crowds are swept past on a moving sidewalk; some pray and weep and others bow in reverence.

Meanwhile, several scientific studies have been done on this fabric. The results are inconclusive. In one 1979 study through infrared photography (used to detect sub-surface layers), Philip Serna Callahan saw an original image that showed no sizing or varnish or any known way to impress the image on the delicate fabric. An enlargement of the eye of the Madonna shows the kneeling Indian boy looking up at her.

A 1999 study, however, through the University of Texas at San Antonio using ultra-violet imaging, contradicts Callahan’s results, as does another in 2002, even as the Pope moved to raise Juan Diaz to sainthood.

Was the vision real? Did the Madonna appear to Juan Diaz on the outskirts of Mexico City? To me it doesn’t matter. The Queen of Angels, and especially this dark-skinned image, has already brought forth so many miracles of hope, comfort, warmth, love—the essence of spirituality—that her presence is engraved in our hearts.

Angels All Around Us

True stories of encounters with God’s heavenly messengers.  Read never-before-published inspiring stories from people just like you whose lives were changed by extraordinary encounters with angels.

Get 3 Free Gifts with purchase!

5 Earth Angels Made His Trip Back to New York Possible

He was stuck in Italy, but divine intervention helped him get home to his family.

How a Bracelet Reminded Her of God’s Love

The piece of jewelry helped her focus on her favorite psalm.

Her Father Experienced The Heavenly Wonder of Nature

Diagnosed with early-onset Alzheimer’s, he basked in the beauty of God’s natural world and always found something to appreciate.