An Earthquake Survivor’s Lessons on Life and Loss

Viral Dalal shares how one of the worst earthquakes in history shifted his perspective on life.

It was January 2001. Viral Dalal (pronounced “We-rull” “D-lal”) had just returned home to Bhuj, India from the U.S., where he was attending graduate school part-time and working full-time as a computer scientist. He was in his bedroom, getting some sleep while his family ate breakfast down the hall, when the unthinkable happened. A 7.7 magnitude earthquake shook Bhuj for two minutes, causing the condominium Viral and his family were in to collapse like a stack of cards.

In the aftermath of the earthquake, Dalal found himself trapped in a small, dark, concrete casket, beneath six stories of rubble. No food or water. He spent five days buried underground before rescuers heard his raspy cry for help. After Viral emerged from the rubble, he discovered he was the lone survivor of the building collapse. His parents, brother, sister-in-law and nephew had died.

Viral spent many years working through his grief, making a conscious effort to move from darkness into light. Here are some of the lessons he learned along the way, condensed and edited from his book, Choosing Light.—Desiree Cole

Give Life a Hug
In this day and age, when a traffic light that doesn’t turn green fast enough can ruin someone’s day, I cannot help but think: why are people so unhappy with their perfect lives? What is everyone really upset about? Where is the problem?

After what I went through in Bhuj, the definition of “problem” changed for me. I know what a real problem looks like. When I was inside the concrete enclosure, trapped for days without any certainty of living another day, a single drop of water or a tiny bit of light would have given me the amount of happiness that one cannot even fathom.

All I can say is that if you are alive and well, you are very lucky. If you have a loving family around you, you are living what some people can only dream of. Life in itself is a beautiful thing. Give it a hug. Every day. 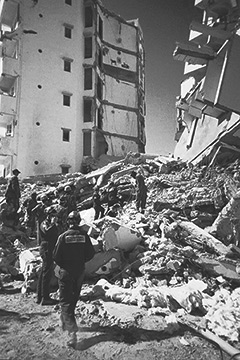 After the earthquake, I had to work to make happiness a way of life, and not an end goal. How did I become happy? One step at a time. Every time I thought about happiness, I thought about my mother first. She was such a happy being. These thoughts made me focus on positives, and on the things that pulled me up. I tried to look at the past with a smile.

So even though I wasn’t stuck inside a concrete box anymore, I continued to work hard on opening up these blocked pathways inside my brain, one scratch at a time. I did not realize at the time that it was an inner engineering feat.

“Consistent drops of water falling in the same spot can make a hole in the toughest rock known to man,” I remembered my father saying.

With persistence and determination I was eventually able to clear these blocked pathways of happiness.

Listen to Your Gut
Before the earthquake, I was attending school part-time and working full-time as a computer scientist. For some reason, I felt compelled to leave that job so I could visit my family in India. It seemed like a crazy move at the time. But now I cannot express how grateful I am to have been able to spend the last days with my dear ones. I fail to imagine what I would have gone through if I had lost my family while I was in the U.S.

I was able to see them and be with them because I listened to my gut. I left my career—my first job in the U.S.—to be with them.

Today, I continue to make decisions that are driven by my gut, knowing now how important that is. So much “light” for living comes from this instinctual level of our being.

Live in the Present Moment
I knew that life was unpredictable, but I also happened to think that such a thing as the earthquake could never happen to my family or to me. Only after going through these personal losses, I realized that anything could happen to anyone, at any time. There were no guarantees.

That’s why the present is much more important than the past or future. The present moment is real. Present life is real.

Value Your Life
You are invincible when the higher power, or the universe, or good luck is by your side. No one knows how much or what it takes for these powers to be by your side, every single time.

Life is extremely, extremely precious. It only takes a split second to throw a very precious life away. I learned not to take life for granted. I learned to value it, much more. And once again I learned that my life and the power to make the right choices will always be in my own hands.