Mysterious Ways: The Sonic Boom That Solved a Crime

Was it just coincidence? Science and serendipity unexpectedly come together to foil a robbery.

For 20 years, the space shuttle has carried American astronauts into space. But while the shuttle missions have had their share of monumental achievements, they never helped solve a crime before.

Until last week. Was it coincidence? Or something more? You decide.

In Kissimmee, Florida, at 2 a.m., all was quiet. The residents of the Remington subdivision were in their beds, fast asleep.

It was the perfect opportunity for two young street toughs up to no good. First they broke into an unoccupied home. Then they went up the street, breaking into cars and grabbing whatever they could.

They would have gotten away with it, too. But then came the sound.

Boom! It was like a blast of thunder, but there wasn’t a cloud in the night sky. Boom! Another blast.

One homeowner, shaken by the noise, went to the window. She looked outside and saw two men she didn’t recognize—in her car. She called 911. Minutes later, the men were in custody. 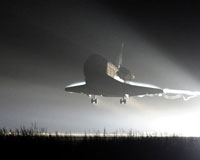 What was that loud booming sound? Not thunder. It was the sonic boom from the Space Shuttle Endeavor, arriving home from the second-to-last shuttle mission.

Who knows what instruments God uses to protect us? If he could use a doorbell to alert a family to danger, then couldn’t he also use a space shuttle?

Maybe it was just coincidence. Then again, if it weren’t for the multiple weather delays it experienced on the launch pad, the shuttle never would have shot past Kissimmee that evening.