The Real Meaning of Passover

The Passover story didn’t end with the Exodus. The Haggadah is the story of us.

Passover begins at sundown today, when Jewish families will gather around the dinner table for the traditional Seder, telling the story of our Exodus from slavery in Egypt. We read this story from a book called the Haggadah.

There are many different versions—some illustrated, some all in English, some packed with traditional songs, others that cut right to the chase across the Red Sea.

Maxwell House coffee, thanks to an advertising campaign cooked up by a Jewish ad man in the 1920s, produces one of the most popular Haggadahs in the United States. Some Jewish families even create their own. The Haggadah used at a family’s Seder often remains a constant for generations.

In a Guideposts article, I wrote about the Haggadah that my family uses, one put together by my childhood rabbi, Rabbi Jacob Friedman. Creating his own Haggadah was such a source of pride for Rabbi Friedman that when he passed away three years ago, at the age of 79, it was mentioned in his obituary.

Over time, our copies have come to resemble works of modern art—spotted with the remnants of festive meals past and spilled drops of kosher wine. Our Haggadah has also become a little out of date—sometimes referencing the struggle of Jews living in the Soviet Union. 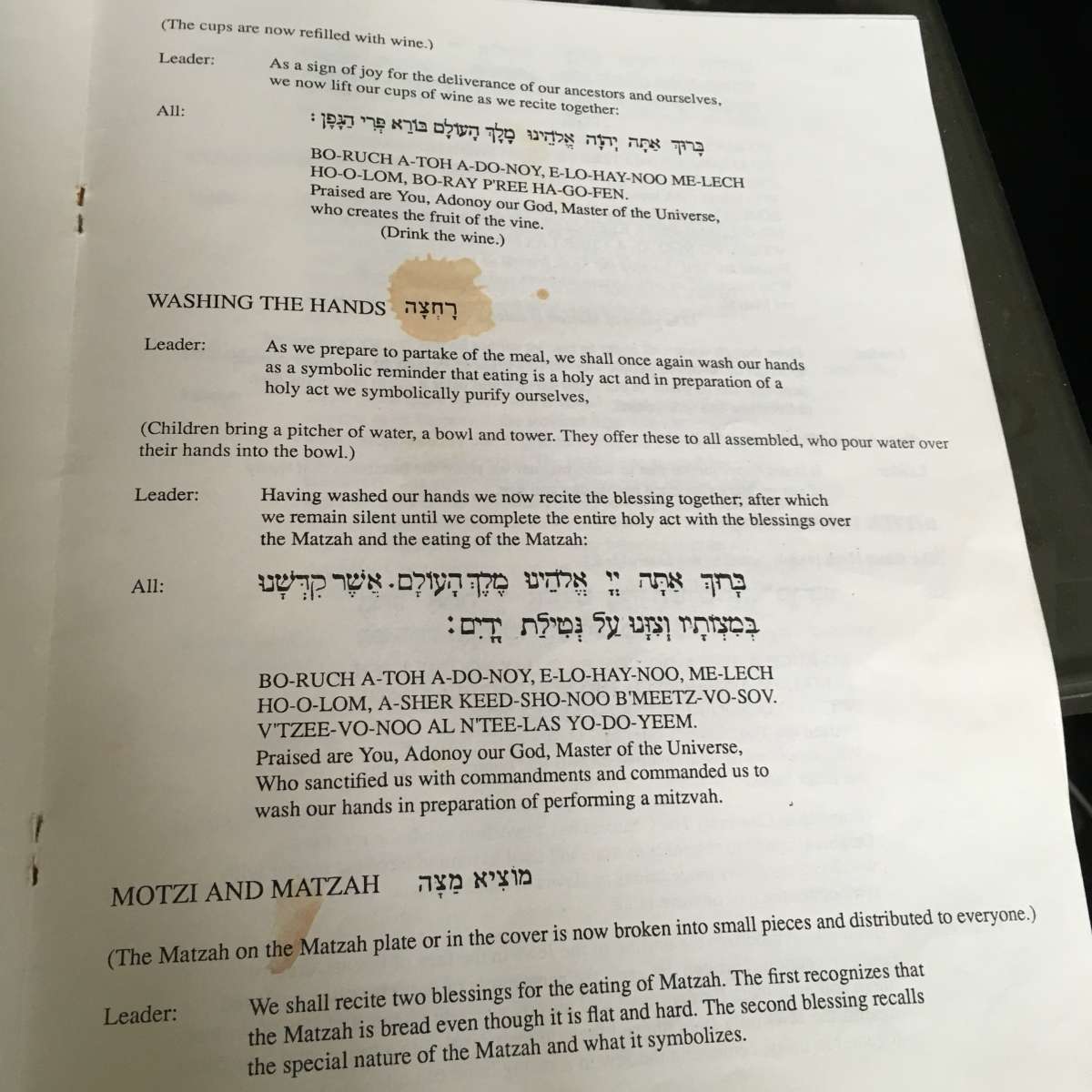 It’s not just my family that’s messy. My wife’s family Haggadahs are stained too—with crumbs of stale matzo still stuck in the creases. Now that our families celebrate together, we’ve decided to make our own Haggadah—combining the best parts of the ones we know and incorporating new material, songs, commentary and stories, to bring the youngest members of the family more into the Passover celebration. I never considered what an important task it would be.

Looking to the web for inspiration, I ended up on Wikipedia, combing through the article about the essential parts of the Haggadah. My eye fell on links to related articles—the Szyk Haggadah and the Sarajevo Haggadah. I’d never heard of either.

The Szyk Haggadah was created between 1934 and 1936 by Polish artist Arthur Szyk. He lavishly illustrated the scenes of the Passover story—but added his own twist.

Hidden in the illustrations were allusions to current events in Europe. The Egyptian taskmasters resembled Nazi soldiers. On the face of the “Wicked Son,” he painted a Hitler mustache. 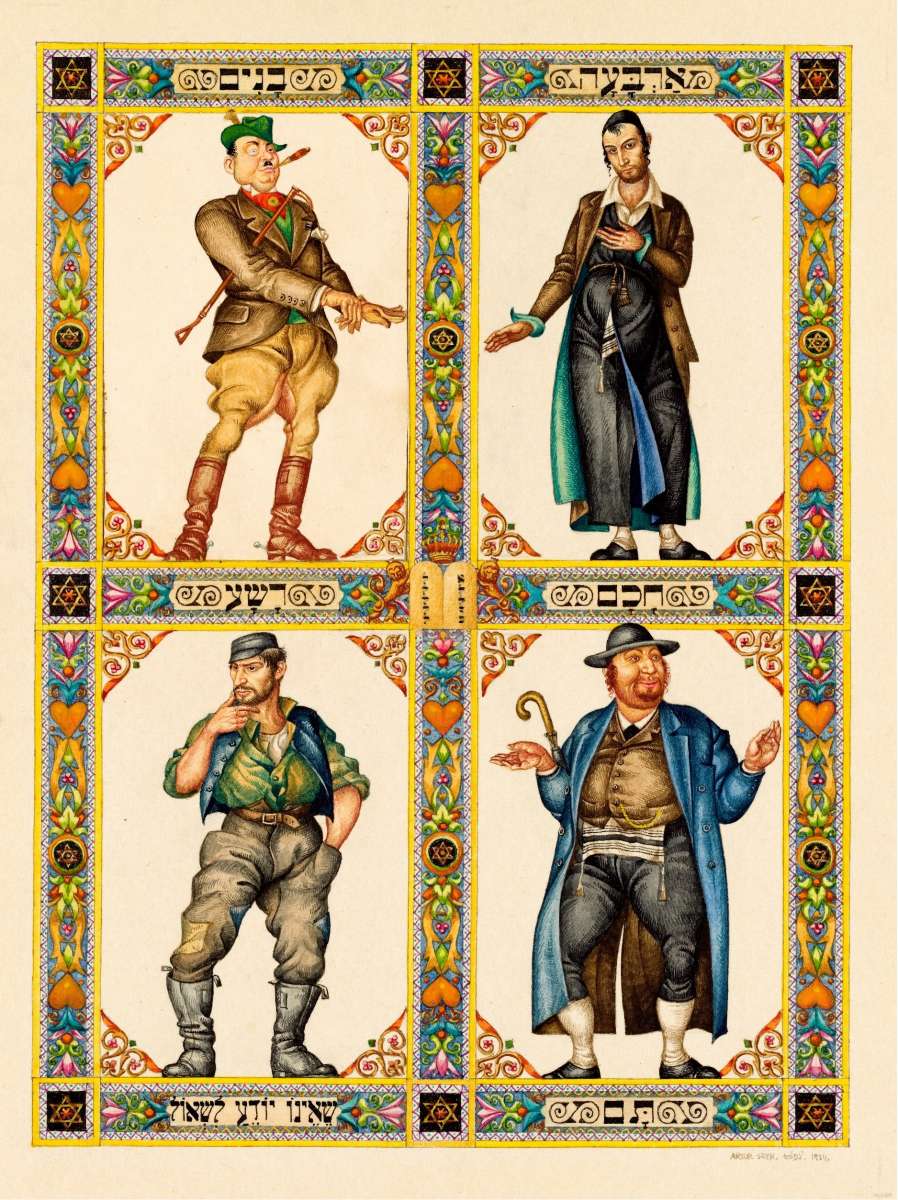 The Sarajevo Haggadah is a similar work of art—but much older. Produced in Barcelona around 1350, it survived the Spanish Inquisition, passed through Italy and eventually ended up in a Sarajevo museum.

During World War II, the museum’s curator smuggled the book to a Muslim cleric, who hid the Haggadah from the Nazis. It even survived the Siege of Sarajevo during the war in Bosnia. As amazing as the book’s history was, another fact from the Wikipedia entry caught my eye:

“The Sarajevo Haggadah is handwritten on bleached calfskin and illuminated in copper and gold. It opens with 34 pages of illustrations of key scenes in the Bible from creation through the death of Moses. Its pages are stained with wine, evidence that it was used at many Passover Seders.”

I suddenly saw our efforts to create a new Haggadah in a different light. I don’t know if our family Haggadah can achieve the fame of the Szyk version or the longevity of the one in Sarajevo…but it’s part of the same tradition, one that goes back thousands of years.

Our world has changed—there’s no Inquisition, no Hitler, no Soviet Union. But our celebration this time of year connects us to the past in a uniquely intimate way.

Those stains on the Sarajevo Haggadah—they’re the mark of a family like my own, who gathered around a candlelit table in much darker times, eating matzo, sipping wine and telling the story of their ancestors’ deliverance just as we do today.

Each generation has added to the Haggadah, through our interpretations, the songs we sing, the stains we leave behind. It’s not just a book, but a living document. A reminder that every generation is responsible for winning freedoms that still remain to be won. We can only win them by retelling the story of how far we’ve come.

Happy Passover to my Jewish readers, family and friends—and to everyone else. We all can take this time to honor the journeys our families made to bring us here and to inspire the future generations that will take us even further.

Does your family have a special book? Something sacred passed down through the generations? Share your family’s story with us.