Unexpected Treasure at the End of the Rainbow

On safari, my wife and I wanted to see a lion up close. It seemed hopeless until the unexpected happened.

You’re probably wondering where I’ve been for the past two weeks. Well, Mysterious Ways fans, I’ve been in South Africa on vacation. My wife and I went on safari, and spent a few days in Cape Town and a few days staying with family in Johannesburg. I must admit, it’s tough to get back to work.

It’s not the jet lag that’s affecting me now, but rather, the afterglow from all the incredible experiences we had over there—everything from close encounters with Africa’s wildlife to enlightening visits to places that shaped Nobel Peace Prize winner Nelson Mandela’s life. They were experiences I’ll never forget.

St. Paddy’s Day is this weekend, and with all the talk of Leprechauns, I thought I’d share one story from our trip about how we found our own pot of gold at the end of a rainbow…

It was our first full day on safari, and it was not shaping up to be a good one. Just as we sat down in the open-topped truck that would take us around Pilanesburg National Park, in search of the Big Five (lions, elephants, rhino, buffalo and cheetah), it began to rain, hard. Our safari guide instructed us to lower the plastic tarp on all sides of the vehicle to keep everyone dry. But when we did, we realized we couldn’t see anything outside. The clear plastic windows were smeared with mud. If I squinted real hard, through the dirty windows and the driving rain, I could maybe make out the dark outline of a wildebeest, one of the most common animals in the park, grazing in some distant patch of savannah. Everyone was pretty miserable.

The guide explained that we were unlikely to see much anyway. “When it rains, animals like lions duck for cover,” she said. “And animals don’t all gather at the usual watering holes. There are plenty of puddles to drink from.”

Great, I thought. We came all this way, and our first day on safari was a bust. We were driving around one of the most beautiful places on earth, with some of the world’s most exotic animals, and we might as well have stuck our heads in a brown paper bag, for all we could see.

The driver picked up speed. The flaps whipped in the wind. Eventually the sound of raindrops splattering on the roof of the vehicle slowed down. “Look at that!” someone shouted.

A lion? I thought, hopefully. 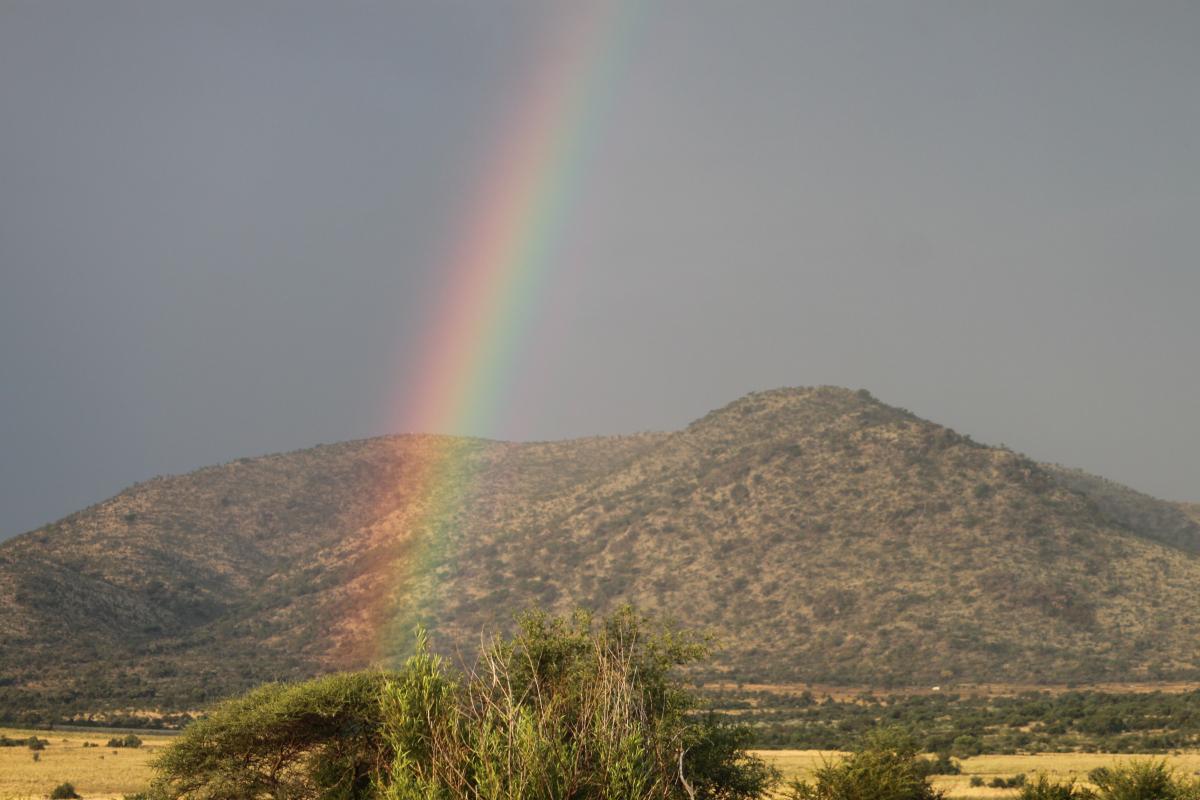 We raised the flaps. It wasn’t a lion, but another astonishing sight. A double rainbow, arching across the landscape. I’d never seen one so complete before. You could even see where it went into the ground, up ahead on the road. The photograph my wife’s cousin snapped doesn’t do it justice.

It seemed we were going to find out. Our driver headed straight for where the rainbow met the ground. By the time we reached the spot, the rain had become only a very light drizzle. The rainbow seemed to have dissipated. There was no pot of gold, but there was something else.

A pride of young lions.

We were so close, I could have reached out and touched them. Of course, I value my limbs, so I didn’t dare. But for several minutes, everyone in the vehicle stared in wonder at the majestic creatures crossing the road and lying in the grass, eyeing us with curiosity through the misty rain. 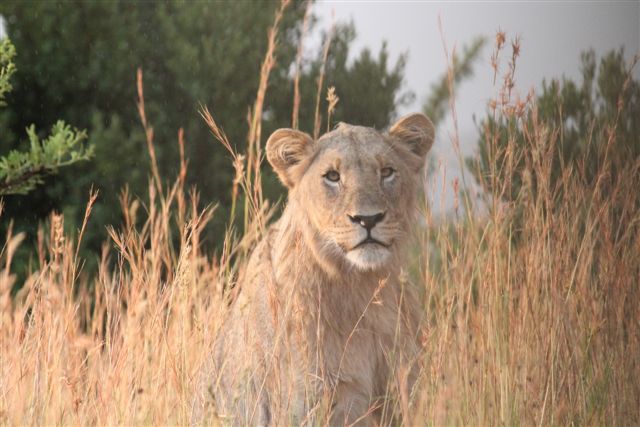 Our first safari wasn’t such a bust after all.

It was the only time we’d see lions so close during our four days on safari. Indeed, such a close encounter was a rare occurrence, our guide told us. That time of day, the mid afternoon, is when lions usually hunker down and sleep, to avoid exhausting themselves in the African sun.

The rain, however, had cooled things down enough to bring them out, and across our path, right at the spot where a rainbow promised we’d find a treasure.

Have a Mysterious Ways story to share? Please send it to us!