Journey to the Holy Lands

I suppose it is actually being in a place—like Istanbul—and walking its ancient streets that finally gives you a sense of the difference between cultures, between history and people and geography and faith.

Arrived safely in Istanbul yesterday with Maggie Peale Everett and met up with Bev Henry and her Travel With Spirit tour crew for an amazing Turkish dinner.

I woke up this morning in only a mild jet lag stupor and took a long walk before boarding our ship in the harbor. I got a little lost in the winding streets of old Istanbul, but that’s good because I never really feel I get to experience a city completely until I get lost in it. 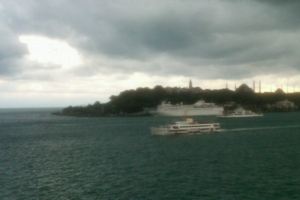 Later, driving to the port, we passed the train station and I suddenly remembered that this is where the legendary Orient Express ended its journey from London, a journey that took many days and wound through a breadth of cultures and countrysides before it reached this conjunction of two continents.

For all the wondrous ways technology has united us, in some ways it has also made culture feel superficial and trivial. Or maybe just less distant. Even a hundred years ago, coming to this part of the world was a major undertaking, a commitment of body and soul. No longer. On Saturday afternoon I was lying on my couch in New York watching college football (and having my heart broken) and 18 hours later I was sipping Turkish coffee in an Istanbul café.

I suppose it is actually being in a place and walking its ancient streets that finally gives you a sense of the difference—which I mean in a good way, as in contrast and high relief—between cultures. Between history and people and geography and faith. Sending a text back to the States from the tarmac at Ataturk Airport is truly cool. But it must have been just as cool (and probably cooler) to disembark from the Orient Express and feel as if you’ve journeyed to a distant land and peoples.

I started to get that feeling this morning wandering around the neighborhood near my hotel and making myself get a bit lost. And I am sure I am going to feel it more and more as this wonderful journey to the Holy Lands unfolds, starting tomorrow with a half day tour of the city before we set sail, including visits to the Hippodrome, the Blue Mosque, the St. Sophia Museum, the Church of Hagia Sophia and, finally, the Grand Bazaar.

I guess I’m not knocking the Internet and digital technology for the diminution of the world. After all I’m transmitting this from my iPad sitting on the deck of a ship overlooking the Bosporus.

Someone Cares: Comfort for Veterans

Her organization donates their time, sewing skills and materials to create beautiful quilts that honor our nation’s veterans.

Someone Cares: A Treat for Trick-or-Treaters

Someone Cares: The Most Important To-Do

Her daily list became a reminder of the importance of kindness unto others.

Continue Reading Someone Cares: The Most Important To-Do