The Christian movie producer details how far faith-based filmmaking has come … and how far it has to go.

The actor/director/producer who’s responsible for popular faith-based films like Courageous and Mom’s Night Out says putting out two films in one year – both Faith of our Fathers and the highly-anticipated Woodlawn hit theaters recently – wouldn’t sit well with one important person in his life.

“I don’t think my wife would let me do it again,” Downes jokes with Guideposts.org.

Downes, who strolls into our interview tousled and a bit tired, is promoting Woodlawn – a film that chronicles the life of star Alabama athlete Tony Nathan.

It’s a big movie with a big budget and even bigger expectations. It’s something Downes admits he never thought he’d be able to create when he began making films nearly 20 years ago.

The California native grew up three hours north of Los Angeles and moved to LA after college to pursue acting. It was there – after joining a Bible study through his church — that he met friend and producing partner David A.R. White.

The two men bonded instantly, even going on auditions together. One of those auditions proved to be pivotal. “We  ended up getting the two lead roles in this Christian youth film,” Downes explains. “It was like ‘Wow, stuff like this exists?’ I was blown away. If you could do this for a living, I’d totally do this! Both of us had that same thought process but those films didn’t exist at the time.”

So Downes and White decided to create them.

For Downes, whose dream was acting, making the shift to producer was challenging.

“We didn’t know how to produce a movie,” Downes admits. “We were just actors acting in our own movies. We brought on friends that were directors and tried to figure it out. It was like going to school and our school was those first few movies we made. We didn’t know what would work, what wouldn’t work or even what people really wanted because we didn’t know there was an audience for it.” 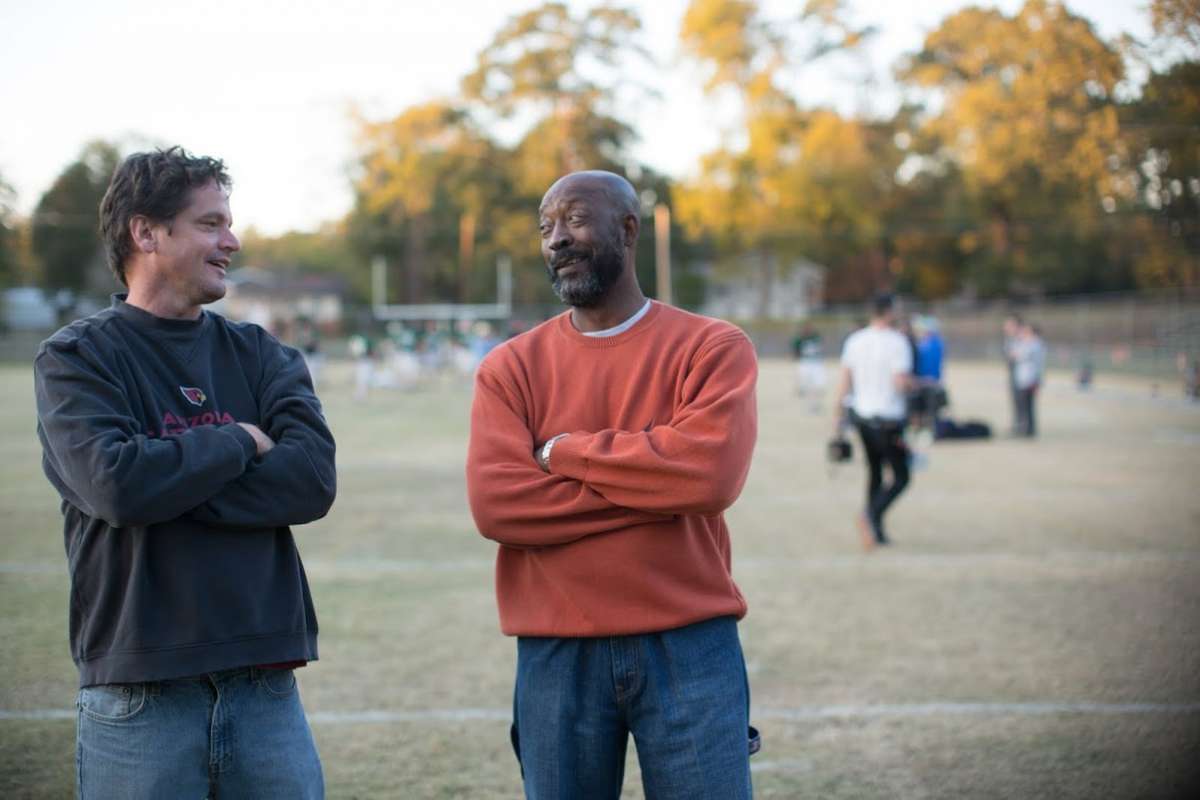 Downes chats with Tony Nathan on the set of Woodlawn.

Before  Downes and White, most faith-based films weren’t made with the intention of being released in theaters.

“Back in the 60s you had some Old Testament movies and an occasional Billy Graham film, but other than that, nothing,” Downes says. “I remember after our first film – I went door to door for a year to Christian bookstores talking to their book buyers, hoping they’d take our movie. It seems crazy but that’s what you do.”

Pioneering in any frontier presents obstacles, but venturing into the wild west of Christian filmmaking meant facing  doubts about the path and purpose of his life.

“If somebody had told us back then ‘Hey, if you stick to it, one day, Christian movies will be released in theaters all across the country on a regular basis’ then both of us would’ve said ‘Ok, great. We’ll keep going.’ But we didn’t have that. We had people telling us that we were crazy. It was hard.”

Fifteen years later, Downes finds himself behind a project that touts one of the biggest budgets of any faith-based film up to this point and a star-studded cast.

Woodlawn is based on the true story of high-school star running back Tony Nathan – a man who would play in two Super Bowls for the Miami Dolphins. Nathan’s story became legend in the South after the young athlete attended a desegregated Woodlawn High School in Birmingham.

Downes joined the project thanks to the Erwin brothers – the directing duo he worked with during Mom’s Night Out.

The film – whose timing has been a topic of conversation thanks to its focus on racial issues – had been put on hold so the brothers could try their hand at comedy with Mom’s Night Out. When the Erwins and Downes returned  to the movie, they did not expect it would be ready for audiences after only 14 months of production.

“The timing is all God,” Downes says. “We should’ve waited another year to make this film. We didn’t have the script finished. We didn’t have all the pieces you’d typically have going into a movie. But we went into this with a lot of prayer and counsel and we just sought out God’s wisdom on whether we should try and do something we’d never done before or wait. The word that we got was ‘Go now.’”

As Downes’ extraordinary year winds down, Woodlawn has been released, but ticket sales and reviews won’t change the way he feels about the film.

“The goal is that you have an impact on people,” Downes says. “You want to make sure that God is honored and that people actually see Him in the work that you do. When you finish a film, you have to release it. You have to give it up to God and let Him do whatever he wants.”

As for the future of Christian filmmaking, Downes remains optimistic.

“We’re having films that are competing with everything else,” he says mentioning hits like God’s Not Dead and War Room. “I think that’s a win. The next step is to continue with those kinds of dramas and maybe take it a step further where you see Bible epics done from a Christian viewpoint. We haven’t quite gotten here yet. Hollywood’s tried it but it hasn’t connected. Once we figure that out, then you’ll see box office results that mirror the comic book stuff. It will take talented Christians to produce and develop those types of movies. You have to invest a lot in it. We’re close to that right now.”