She feared her life as a caregiver would be limited. Instead, it provided an opportunity to forge a loving relationship with her grandfather.

Six months. that’s how long the doctor said my grandfather had to live. Not because he had a terminal illness. Because he was grief-stricken after my grandmother’s death.

“When couples are as close as your grandparents, the surviving spouse usually dies within a short time,” the doctor told me. The question wasn’t how much time Grandpa had left but how he would spend it. We had two options: Either I moved in with him to become his full-time caregiver or he would have to leave his beloved home.

I took Grandpa back to the house he and my grandmother had shared for more than 40 years. We sat on the faded red sofa in the living room together. I’d always loved this spot because it offered the perfect vantage for gazing out the big picture window. You could see the backyard, the La Puente valley below, the snow-capped mountains in the distance—a reminder that the Lord gives us a world of possibilities.

BROWSE OUR SELECTION OF BOOKS ON CHRISTIAN LIVING

I had spent the past three months sleeping on this sofa, but I’d been too busy looking after my grandmother to enjoy the view. When she got sick, I dropped everything to take care of her. I got a leave of absence from my job teaching career planning at a nonprofit, asked my neighbors to keep an eye on my house and moved in with my grandparents 300 miles away. 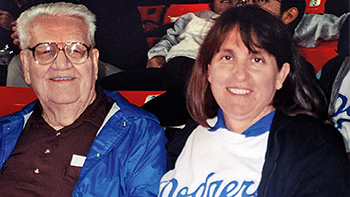 “What’s going to happen to Grandpa when I’m gone?” my grandmother had asked me one night as I helped her get ready for bed.

I had been wondering the same thing.

Everyone adored my grandmother. Our entire family called her Grossie, after a loving term for grandmother in Swiss German. On car rides to her house growing up, my siblings and I would chant, “We’re going to Grossie’s!” Grossie made us feel special. She baked with us, laughed at our jokes and spent hours playing makebelieve.

Grandpa wasn’t as involved. He was either busy in his woodshop or involved in his Dodgers game (or Lakers, depending on the season) on TV. In my memory, the only time he spoke to us grandkids was to tell us to be quiet.

I wasn’t close to my grandfather. I was nervous about taking care of him. But I had a promise to keep.

Fifteen years earlier, my mother had confided in me that when her parents could no longer take care of themselves, she would leave her job to take care of them. She considered it part of her promise to honor her father and her mother. That was the last conversation I had with Mom. Shortly afterward, she was killed in a car accident. As her oldest daughter, I felt it was my responsibility to fulfill her commitment.

“Don’t worry, Grossie,” I told my grandmother. Her hospital bed in the living room faced the picture window, and I eased her onto the pillows. “I’ll take care of Grandpa.”

“Oh, Kathy, thank you.” Within a week she was gone, slipping away peacefully.

Now the view from her sofa felt taunting, not inspiring. Staying with my grandfather didn’t mean simply pausing my life for six months. It meant giving up on the big picture. Quitting my job. Selling my house. No longer having the freedom to visit my two grown daughters anytime I wished. And dropping out of school.

I’d put college on hold to support and raise my girls, but I dreamed of getting my bachelor’s degree and becoming an English teacher. Several months before, at age 40, I’d begun taking college classes. I’d already told Grossie I would take care of Grandpa, but the consequences were just beginning to hit me. If I said yes to my grandfather, I’d be saying no to my dream.

Lord, if this is your will, you’re going to have to make a way, I prayed, turning away from the window. It was what I’d been praying since coming to take care of Grossie.

I had been wondering how I could keep my promise then. Surprisingly, once I raised the question of our grandparents’s future with our extended family, they banded together to offer financial support if I became the caregiver. Now my house not only sold quickly but gave me a decent profit.

I had my answer. Six more months, it is.

READ MORE: HOW TO ASK OTHERS FOR HELP WITH CAREGIVING

I called my supervisor to let her know I wouldn’t be coming back. Then I told my daughters I was moving permanently.

The first days were the hardest. Without Grossie, the house felt empty. Sad. Way too quiet. Grandpa was basically a stranger to me. I didn’t know what to say to him.

Then at the funeral, I overheard him tell a relative how he was handling his grief. “Kathy and I are working through it together,” he said.

Grandpa was right. We were in this together. It was time to start acting like it. Except how would we fill our days?

I’d always had a busy life. That’s how I liked it. I ran from my job to neighborhood meetings to studying at night. Nonstop activity from 5 a.m. to 10 p.m. Taking care of Grossie had been no different. She’d needed me around the clock. I gave her injections, sponge baths and foot massages. Kept track of her medications and spent hours in the kitchen trying to tempt her appetite.

Grandpa was in good physical shape. He didn’t need help like Grossie had. And he wasn’t big on outings. To him, a trip to the grocery store was enough activity for the day.

If we were really going to work through this together, we had to make a life for ourselves.

One Friday night I was preparing for a quiet night at home when Grandpa asked, “Do you want to go to the movies, Kathy?”

“Of course!” I loved movies. From then on we went to the movies once a week. It was a small thing, but it was ours.

That was only one night a week though. Two months into permanent caregiving, I still had more time than I knew what to do with.

I was sitting on the sofa one chilly January evening, staring at the mountains and wondering what to do when it suddenly hit me. College. Why couldn’t I go back? I had plenty of time and some extra money from selling my house. Maybe I didn’t have to give up on my dream. Maybe the Lord was still making a way for me.

I was hesitant to bring it up to Grandpa. One night during a commercial break from the Lakers game on TV, I said, “I’ve decided I’m going back to school to finish my degree.”

I thought he might not want me to go, but he surprised me. “That’s a great idea, Kathy,” he said. “You know, I wanted to go to college when I was young but I wasn’t in the financial position to do so.”

After that we settled into an easy routine. I went to class in the mornings, and we spent the afternoon chatting. Grandpa told me stories from his youth. I’d tell him what I was learning.

The six-month mark passed. Grandpa showed no signs of slowing down. With my encouragement, we went to Dodgers games (he’d been a fan since their days in Brooklyn). We watched the Lakers on TV. One time we even brought a radio to Dodger Stadium so we could listen to the Lakers game at the same time.

In the summer we went to ragtime concerts in the park. Grandpa had played banjo in a band in his sixties and knew some of the performers. I even convinced him to use his woodshop to make a manger for the Christmas program at church. And, of course, we had our weekly movie night.

“What movie do you want to watch tonight?” I asked him one Friday about a year after I started our tradition.

“Oh, you can pick. I don’t really like movies,” he said absentmindedly.

In that moment I realized how far we had come.

From not knowing what to say to each other to talking for hours. From feeling nervous about staying with him to cherishing our time together. From thinking I would have to give up my dream to gaining the time to pursue it.

Three years into living with Grandpa, both of my daughters had babies. Grandpa consented to flying to see them for Thanksgiving, and he got to meet his great-great-grandsons. I felt so blessed to be a grandmother and a granddaughter at the same time.

Everything changed one afternoon four years into our journey together.

“My arm is weak,” Grandpa said when I got home. “I can hardly lift it.”

I rushed him to the emergency room. He’d had a stroke affecting his left side. Doctors said he would need 24/7 care.

Grandpa would have none of it. “Absolutely not,” he said. “You’re not dropping out. I’m going to see you graduate.”

He worked tirelessly in physical therapy and regained movement in his left arm and leg. I threw myself into my studies, working as hard as Grandpa. Getting my bachelor’s degree was as much his dream as mine by that point.

Macular degeneration started stealing Grandpa’s sight, but not before he did get to see me graduate. I don’t know who was more excited, him or me.

The next summer a second stroke affected his ability to speak. By then we were so close, I usually knew what he was trying to say anyway. Those six months the doctor had given him stretched into five years before Grandpa passed away.

I sat on the well-worn sofa in the living room one last time. The view out the window was the same, but I was different. I’d become a caregiver to keep a promise. What I’d discovered was the joy of getting to know and love my grandfather and letting him get to know and love me.

More important, I’d come to see God’s hand in my life. Saying yes to what the Lord asks of us opens up possibilities beyond what we might have dreamed. Finally, I understood the big picture.

The founder of a community for women balancing eldercare, kids and career says you have to find your ‘sweet spot.’ Mealtime Changes That Can Benefit a Loved One with Dementia

Small shifts in the foods you prepare, the table setting and the environment can have a big impact.

Once you recognize the signs, you can take steps to help protect the older adults in your life.