The acclaimed producer, actor and writer Tyler Perry’s dreams didn’t come true easily, but his faith got him through the tough times.

I’d written a book, a collection of inspirational insights and lessons. Now I just needed the right title for it. Then a friend wanted to talk. He was feeling pretty down about his life, and I urged him to see all the good things God had in store for him: love, compassion, peace of mind. If only he’d step up and reach up. “Higher is waiting,” I said. That was it, both my advice and the title of the book. 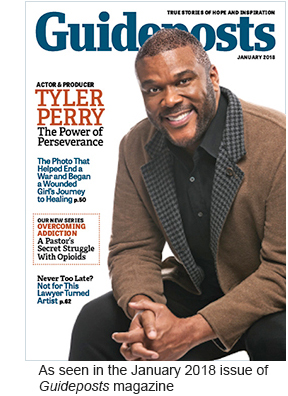 We all have dreams deep inside of us. They just need to be pursued. Higher is waiting. It’s up to us to stay in the climb and claim it. Here are some of the spiritual principles I’ve come to trust.

God loves us all. I started out close to the bottom. We didn’t have much of anything, but I got plenty of love from Mamma and my Aunt Mae. I lived for our weekend jaunts out to Aunt Mae’s from our place in New Orleans. Mamma would pick me up from school in her ’69 powder-blue Cadillac Coupe de Ville. She would turn up the volume on the eight-track player in the car’s dashboard and belt out the blues in her unforgettable voice (more on that later).

As soon as our car pulled up, the screen door would snap open and Aunt Mae would appear with arms stretched wide like angel wings. “Lord,” she cried, “my children are here.”

In the mornings, I could hear her singing gospel hymns. I crept out of bed once and tiptoed into the kitchen to listen. “What are you doing, Aunt Mae?” I asked.

“Talking to Jesus, baby,” she said. “Did you say your prayers last night?”

“Then you were talking to Jesus too.”

In New Orleans, on my walk to school, there was a blind man named Mr. Butler, who sold his wife’s praline candy to make a living. I got in the habit of walking him across the busy intersection of Washington Avenue and LaSalle Street. One time, I approached him without saying a word. I just stood there. “I know you’re there, son,” he said, startling me. How did he know?

“I was listening for you,” he said. He might have been blind, but he still saw me. Aunt Mae and Mr. Butler made me feel as if I counted for something. I was noticed. I was somebody who was seen and loved by God.

Prayers get answered. No matter how bad things got, come Sunday morning, Mamma would take me to church. Her uncle DJ was our preacher, and although I wasn’t always in the mood to hear him, one sermon in particular touched my soul. “Children,” he bellowed from the pulpit, “God will answer your prayer. Just ask him. No matter what you’re going through, God will see you through it.”

That night, alone in my bedroom, I decided to put his claim to the test. While the moon cast shadows on the wall and the cicadas sang, I got on my knees, leaned my elbows on the bed, clasped my hands together and closed my eyes. “Let the people who are living inside our TV step out and talk to me and love me so I can love them back,” I prayed.

As a kid, I had a pretty creative imagination. I thought that the TV characters on my favorite shows, like Gilligan’s Island and The Brady Bunch, were real people, about four inches tall, living inside our TV. I didn’t have the nerve to go behind the TV set to tear it apart (my father would’ve killed me). I wanted those people to come into my life.

An impossible prayer to answer? It would seem so. But God understood my little boy’s yearning to love. A few days later, we learned that our neighbor across the street was moving and wouldn’t be able to take her parakeets, Fifi and Pierre—about four inches tall—with her. She asked if I would care for them. Would I ever! Fifi and Pierre were even better than little people stepping out from the TV. God’s answers are even more than we expect.

Forgive even when you can’t forget. On Fridays, my father, Emmitt, would come home from work, his week’s pay folded into the back pocket of his overalls. He’d take a long bath, put on his creased jeans and freshly laundered plaid shirt and yell at us to find his shoes, a hint of the storm to come. When he came home hours later, stinking of alcohol and cigarettes, there would be hell to pay. He’d stomp through the house, and if anyone got in his way, he would explode, his fists flying.

He beat my mother, he beat me, he beat all of us. Afterward he might beg for our forgiveness, but I prayed that somehow when I grew up I could take care of Mamma so she would be free of him. I promised her that one day she wouldn’t have to worry about a thing. As soon as I was old enough, I left home to try to launch my career. But the anger was still there. One day, when I was staying in a run-down, pay-by-the-week hotel in Atlanta, I finally had the strength to call up Emmitt and yell at him. “How could you have treated me so bad?” I screamed into the receiver.

There was a pause. “You don’t know what happened to me,” he said, then hung up. I put the receiver back in its cradle. Something in me began to lift, the darkness to dissolve. It was the beginning of forgiveness.

When you forgive someone, you do not need to let them off the hook. Emmitt did terrible things to us—and I remember all of it. But as I learned about the abuse he had suffered, I found it easier to forgive. It wasn’t something I could do on my own. It was God’s grace.

God’s timing is not yours. My dream was to write and perform. For five backbreaking years, I worked at producing my play I Know I’ve Been Changed. The first time I did it, I spent every cent I had. I rented a theater in Atlanta, hired actors, built scenery, got props. I figured opening night would be packed. You know how many people showed up? Thirty.

Did it stop me? No. This was my calling. I saved up the money to put on the play again, this time in New Orleans. I hired actors, put up flyers, sent out press releases. The same thing happened. The theater was half full. I tried again and again and again, working at dead-end jobs just to raise the money. Finally some guys coaxed me into doing it at the historic House of Blues in Atlanta. That night was one of the coldest on record, and the heat in the theater wasn’t even working. I sat in the dressing room—angry, empty and hopeless.

I got up and started pacing, speaking out loud to God, “You give me these dreams and then you don’t see me through. What’s going on?” God spoke right back: “I’ll tell you when it’s over. You don’t tell me. You will persevere! Now look out the window.” I went to the window and gazed outside. There were people lined up around the block. The performance was a huge success. After that, I could barely turn people away who wanted to book me in their theaters, big venues. What a lesson in persistence. Wait for God to say he’s done. Don’t you tell him.

Love stays with you. I was able to keep my promise to Mamma and take care of her for the last 12 years of her life. At the end, I wasn’t ready to let her go, even though she was in a lot of pain. I’m glad she has no more pain, but I miss her every single day.

I can still hear her singing in the church choir. I could pick out her voice in any crowd, and let me tell you she had a terrible voice, completely flat and off pitch, but it didn’t prevent her from shouting full-throttle about how good God is. I can still feel her hugging me tight, making me feel safe, protected and loved. When I was little, she’d hold my head on her belly and I would get a whiff of her Woolworth’s perfume. “I love you, Junior,” she would whisper, and that was enough for me.

When I moved out, Mamma and I spoke nearly every day. I would ask if she needed anything. She would say, “I need you to be happy.” I guess that’s one reason I never gave up on my dreams.

She loved Christmas, but she had her quirks. Every year, she took her Christmas tree out of its box and set it up but she never put ornaments or lights on it. It would just stand there like Charlie Brown’s Christmas tree. And when it came to giving, she would buy me the same thing every year: plaid flannel pj’s from Walmart. Admittedly I’m hard to buy presents for, but these pj’s never fit. They were way too small for me. And yet I’ve saved every pair. Because they came from her.

She died in early December, so starting at the holidays and going through February, her birthday month, all the way to Mother’s Day, I especially miss her. I didn’t know that grieving could last so long. Mamma’s been gone almost 10 years, but I still feel the ache. Ride the wave, I tell myself. Don’t let it drown you.

Not long ago, I was in the kitchen, thinking of an unfinished conversation we’d had, something we would both cry over. I put my dish in the sink and turned on the water. It came out too fast and splashed onto the counter and onto some family photographs there.

I looked over, and there was a drop of water on Mamma’s face, as if she were crying with me. She’s still in my heart. Love like that—love that nourishes your soul—always will be.

Whether you are reflecting on 9/11 or the anniversary of something that challenged you alone, there are two main directions you can face.

Rabbi Barbara Aiello told her father she would bring the Jewish faith back to his hometown.

She Prayed for Guidance After a Difficult Move

Could they make this house their long-term home? She waited for God to give her an answer.