Remember: We Are God’s Precious Jewels

In God’s sight, we are always worthy and of great value.

Did you know that March 13 is National Jewel Day? In honor of that, and all things precious, here’s an excerpt from my new book, God Glimpses from the Jewelry Box: Becoming Jewels God Can Use (BroadStreet Publishing). I hope it will give you some inspiration for those times when you’re struggling with feelings of inadequacy:

“Wait a minute, Melissa,” Amy said. “Let’s look through that box again before you throw it out. Do you think that strand of pearls might be valuable?

Melissa looked skeptically at her friend. “I don’t think real pearls would be stuck in a box of cheap toys.”

Melissa’s mom had passed away a few weeks earlier, and the two friends were emptying her house for the new tenants. Since Melissa’s mom had been a hoarder, it was quite a task. Some of the rooms were inaccessible since they were stacked to the ceiling with boxes. Others only had a tiny path through them to a couch or bed. Even the bathtub and oven were crammed with things. 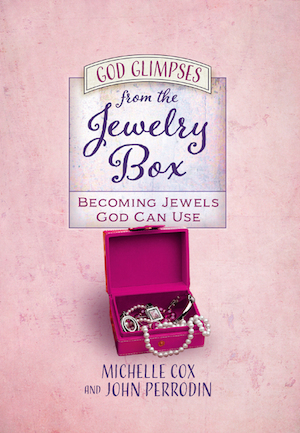 Melissa and Amy had spent weeks going through the piles. It looked like they hadn’t even made a dent. They’d filled a moving van to capacity and packed the car full numerous times. Melissa had given items to family members, multiple loads had gone to Goodwill, and they’d thrown out more than two hundred bags of trash. Yet the house still looked almost as it had when they started. Long weeks of sorting and packing still stretched ahead of them. So you can understand Melissa’s doubt that the pearls in the box of toys might be real. But she listened when Amy said, “Why don’t we have a jeweler look at them before we throw them away?”

“Okay, but don’t be disappointed when he laughs and says they’re worthless.”

A few weeks later, the friends met with a jewelry appraiser. “Sir, we found some pearls in a box of junk toys that belonged to my mother,” Melissa said. “I think they’re worthless, but my friend thinks they might have some value. Would you look at them and see what you think?”

The jeweler removed the pearls from the bag. He clasped his hands around the cold strand of pearls, feeling them warm from the heat of his hands. Then he cleaned them with gentle care. “Oh my,” he said softly as he took a close look. “Girls, not only are these pearls real, they’re extremely valuable. The luster is amazing and the hand knotting is superb. These are some of the finest quality pearls I’ve ever seen.”

Just as Melissa looked at the strand of pearls and thought they were junk, I wonder how many times each of us have looked at ourselves and thought, I’m worthless.

Read More: A Lily from Heaven

That’s when God looks at us and says, Wait a minute. You might not think you’re worth much, but I see something of immense value. I paid a great price for you, and you’re priceless to me.

Then He clasps His loving hands around us, spreading His warmth into our lives. He cleans away the imperfections and then says, Worthless? Not a chance! Because in His eyes, we’re one of His precious jewels.

Used with permission from BroadStreet Publishing.

Know your triggers, focus on the facts and other tips to help you keep calm and carry on.

The Taiwanese-American hoops star shares his favorite Bible verse, his real-life hero and his reaction to a new documentary about his sudden 2012 ascent with the New York Knicks.