Pray with a Posse

The nightmare started with a phone message: “They’ve arrested me. Mom, help me.” My husband and I were 1200 miles away, and I was at a Christian conference where I was expected to speak.

I walked onto the platform and asked the group for prayer. 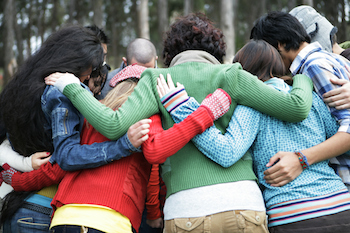 I’m convinced God hand-picked the man who stepped to the front, placed his bear-sized arm around me and prayed the most heartfelt and healing prayer I’ve ever experienced.

His words lifted to heaven like a sweet aroma and their meaning soaked my heart like a soothing spring rain. In the weeks and months to come, he and four other individuals would form an unbreakable prayer posse.

As the months dragged past, court date after court date washed over us like ocean waves, rising to nearly drown us. With each answered prayer the waves subsided, retreating back into the depths waiting for the next tide.

Morning and night, countless times through the day, I dropped to my knees, calling on God for mercy. Repeatedly through email and Facebook, I called on my prayer posse, who offered no judgment on me or my child but faithfully and fervently prayed the need. Their faithfulness gave us strength.

Just weeks before the final court date, I’d led a Bible study on 2 Chronicles 20, the story of King Jehoshaphat and how his kingdom was about to be attacked. Jehoshaphat called the people together to pray. God sent a prophet to tell them the battle was not theirs but His. He’d already fought it and won.

I did the same. The original posse of five grew to everyone I knew–hundreds of family and friends. I asked them to pray that God would fight this battle for my child before he entered the courtroom. And they did.

In the courtroom, however, our child faced a decision: Make a false plea and accept a consequence for something he didn’t do, or tell the truth…and face even worse punishment. The state’s attorney pushed for punishment. We sobbed with our son on the phone and the decision was made: Accept a plea.

When my son finally called, his voice was filled with joy. “You won’t believe this, Mom. It was a miracle.” He said that–for the first time–he had been allowed to speak in the courtroom. He was given an opportunity to explain…and the judge listened!

Though there was still a small consequence, the complete reversal of a stubborn prosecution stunned the court. When the gavel struck the bench, our son walked away from a battle that had been won for him.

I could never adequately express my gratitude and love to my prayer posse. They labored in prayer for our son and God won the battle. They did not offer vague or hollow promises to pray but prayed each time, often at the very moment I asked.

I can’t overstate how important their prayers were to us–so much, in fact, that I will never hesitate to call on that posse or a new one anytime I am in need.

If you're looking for an online prayer posse, check out “How to Start an Email Prayer Chain.”

FREE PREVIEW! Read an excerpt from 365 Days of Prayer now.

Pre-order now. Expected to ship late September. Your credit card will not be charged until book is shipped.

What Prayer Can Do: The Three Rules of Life

He prayed for a way to convince his grandson to focus less on video games and more on his studies.

An Angel Helped Her Buy Her Dream Bedroom Set

But the new heaven-sent friendship ended up being even more valuable.

In this story from November 1971, the star of the popular western TV series Cheyenne tells how his life was changed by the accident that almost killed him.