Los Angeles, California, lives up to its name. From elegant statues guarding the skyline to paintings on street corners, the city truly has angels in abundance–in even the most unlikely places. 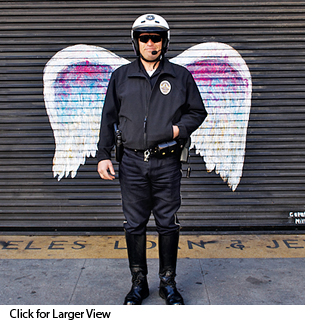 On the Street: Scattered around L.A., artist Colette Miller’s painted wing installations become interactive street art. “I kept thinking that the image of wings as enlightenment, hope, freedom, purity and flight would be a good thing for people to see,” Colette says. “We are the City of Angels. Why not just be that?” See more people posing with Colette’s wings. 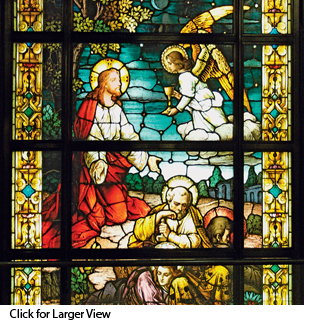 Our Lady of the Angels: This cathedral was built to succeed St. Vibiana’s Church as the seat of the Archdiocese of Los Angeles. When that church was severely damaged in the 1994 Northridge earthquake, 16 of St. Vibiana’s stained-glass windows, including this one in the Garden of Gethsemane, were salvaged from the wreckage. The windows were installed in the new cathedral as symbols of resilience and faith. 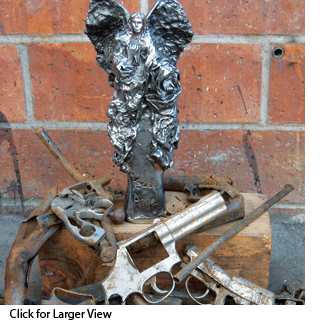 Good Neighbors: The City of Los Angeles hosts an annual gun buyback, allowing citizens to exchange guns for groceries and make their homes a safer place to live. Thousands of unregistered guns are turned over to the local Violence Prevention Coalition, where youth involved in one of the gang-prevention programs melt the weapons down and mold them into “Angel of Peace” statues. The transformed objects are returned, with gratitude, to the homes of those who work to restore peace in the community.

Did you enjoy this story? Subscribe to Angels on Earth magazine.