Is True Love a Reason to Break a Vow?

How a former monk and a former nun broke their vows, but kept the faith.

Today is Valentine’s Day, and all sorts of love stories are rising to the surface. On our website, you can read about the unbelievable secret a young bride and groom discovered just before their wedding day; the wrong email that connected two kindred souls living a world apart; the matchmaker who connected two frustrated singles; and the Valentine’s gift that meant something very special to a waitress.

One offbeat love story I heard today was shared by comedian John Fugelsang, former host of America’s Funniest Home Videos, on his Twitter page. His humor can be off-color, to say the least, but the story he told wasn’t comic—it was the fascinating tale of how his mother and father, a former monk and former nun, broke their vows to the church and married each other.

John’s mother, Peggy, joined a convent, seeking an escape from an abusive childhood. John’s father, Jack, became a Franciscan monk after high school. Both planned to dedicate their lives to the church, forgoing marriage and a family.

Then Jack was struck with tuberculosis. In the hospital, he was cared for by a young nurse in a nun’s habit—Peggy.

Jack felt the meeting was not by chance. He fell madly in love with Peggy, though he kept his feelings secret. When Peggy went to Malawi to care for people with leprosy, he began writing to her, keeping her and the other nuns informed on the events happening back in the states during the turbulent 1960s.

For 10 years, Jack loved Peggy from afar. After Peggy’s father died, she returned to her family in the States. Jack met her at the hospital where she worked and professed his love. Peggy was appalled. They’d both made a vow to God, hadn’t they? 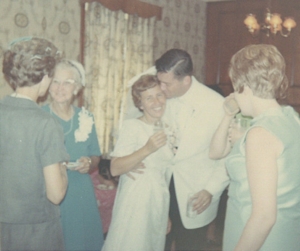 But Jack’s superior could tell how the young monk in his charge really felt. “If you love her, marry her,” he told Jack, releasing him from his commitment.

According to their son, Jack and Peggy never separated their love for each other from their love for God. To both of them, Jack’s tuberculosis and their meeting in the hospital wasn’t a random series of events.

They broke their solemn vows, but both maintained their devotion to God for the rest of their lives.

“There are two things God can’t do,” Jack told his son. “He can’t stop loving you, and he can’t stop forgiving you.”

National Public Radio put together a slideshow of John’s Tweets and pictures.

What happens when our love and our faith collide? Does one need to overcome the other? Or can they merge together, as they did with Jack and Peggy? Isn’t that what a marriage is? A merging of love and faith?

I suspect we’ll have a lot of opinions on what Jack and Peggy did. It can be hard figuring out what path to take, especially when love is involved. Are our vows unbreakable? Or does God understand better than we do where our lives need to go—and what it takes to get us there?

Did you ever feel the need to break a promise to God? Did it teach you an unexpected lesson, or lead you on a new path? Send your story to mw@guideposts.org.

The title of this little eBook makes a big promise—but it should come as no surprise. After all, Jesus asked his followers to have faith, hope, and charity. But sometimes, life’s problems seem so hard that it isn’t easy to have hope. That’s why cultivating hope is essential to Christian faith. And in this FREE eBook, you’ll find spiritual direction based in Scripture to help you pull yourself out of depression and to find the hope in your heart.

5 Earth Angels Made His Trip Back to New York Possible

He was stuck in Italy, but divine intervention helped him get home to his family.

How a Bracelet Reminded Her of God’s Love

The piece of jewelry helped her focus on her favorite psalm.

Her Father Experienced The Heavenly Wonder of Nature

Diagnosed with early-onset Alzheimer’s, he basked in the beauty of God’s natural world and always found something to appreciate.