Having had a son at war, I’ve learned to spend time in God’s Word, diving in and going deep.

But He answered and said, “It is written, ‘Man shall not live on bread alone, but on every word that proceeds out of the mouth of God.’” (Matthew 4:3)

We’re fortunate to live only a few hours away from the coast, so we spend several weekends a year there.

My favorite times at the beach are long morning walks. One morning, I found myself focusing on the many different types of birds foraging for food. As I watched, I couldn’t help but draw parallels to my own spiritual life. 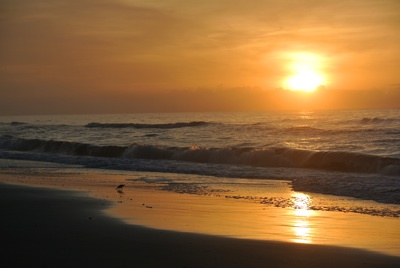 The smallest birds were the quick sandpipers running along the shoreline. They appeared to almost be playing tag with the waves, chasing and being chased as they darted here and there in search of food. Getting fed seemed much more of a game than a serious quest–hence their tiny size.

Next were the obnoxious seagulls. They seemed to me the bullies of the shore. They spent their time aggravating the smaller birds–and even us, if we had something they thought they wanted. I also noticed they were seldom satisfied. It wasn’t unusual to see one of them drop a piece of food if they thought they had a chance for something better.

The largest of all the winged creatures I observed were the pelicans. These majestic birds tended to stay farther from shore, searching out a more hearty prey under the sea. I was fascinated by their varied flight paths. They stayed close to the water at times, the tips of their wings just grazing the tops of the waves. Then, when they spotted a school of fish, they’d shoot up into the air and back down in a steep dive that took them completely under the water.

I couldn’t help notice that the largest and strongest birds were the ones willing to dive deep to get fed. The most delicate were those that waited for whatever tidbit was within reach. The bullies tried to appropriate whatever they wanted, never satisfied and always quarreling.

How like us they all were. I hate to admit how I could see myself in every group. I’ve lived (or tried to live) like those tiny sandpipers, pecking at the crumbs instead of going to the Bible itself.

I’ve also chased after many kinds of unhealthy theology, often being so intent on following the crowd that I dropped something nourishing so I could have something that turned out to have no value at all.

But the past few years, as I’ve lived with a son at war, I’ve learned to spend time in God’s Word, diving in and going deep. There I’ve found the abundance of what I need to live in strength and in health.

Where do you go for your spiritual nourishment? I’d love for you to share a verse or book that has led you to a deeper understanding of God.

This devotion reminds us that all of God’s wondrous creations—even a simple flower—can hold inspiring surprises for us.

This devotion assures us that, even given the majesty of God’s infinite creation, each of us is important to him.

This devotion reminds us that God blesses us in innumerable ways, sending gifts both large and small.