I’d never prayed for such a thing, to forgive a Pekinese. This was a first.

I picked up the phone on my desk after checking the caller I.D.

“Hey, Jules,” I said to my wife.
“Edward, I don’t want you to be upset. Everything’s OK…”
“What’s OK? What’s wrong?”
“Really, she’s all right.”
“Who’s all right? You’re upsetting me.”
“Don’t get upset…”
“But you’re upsetting me! What happened?”
Pause. Breathing. Sigh.
“Millie got bit.”
“What?!”
“Just a nip. On the nose. By a Pekinese. At the pet store.”
“A Pekinese? One of those little rat dogs? Really?”
“I took her right to the vet. She’s going to be fine.”
“The vet? She had to go to the vet?”
“I didn’t want the bite to get infected. They gave her a shot and some antibiotic cream. She was very brave. Hardly even cried.”
“She cried? Millie cried?!”
“Just a little. She’s fine now.”
“What’s that dog’s owner’s number? I want to have a word or two with her.”
“I didn’t get her number. She left. I’m not even sure she realized what happened.”
“Oh, she knew all right. They always do. They’re sneaky. That’s why they have little dogs.” 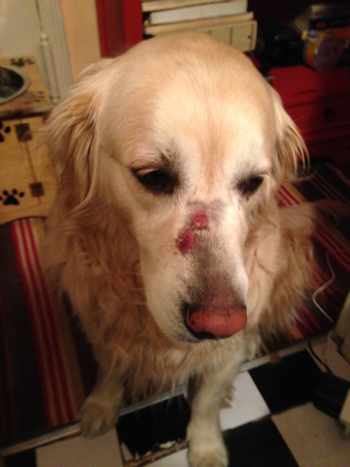 I hung up. You know that expression, “My blood boiled”? I never took it literally until now. My blood was roiling. I thought the back of my neck was going to burst into flames. How dare that owner! How dare that dog! Millie is the sweetest, kindest creature in the world. In her nearly seven years on this earth (her birthday is April 1) she has never been in a fight and she would never, ever fight back against a nasty little canine pipsqueak like a Pekinese.

The weekend was here and I knew what I was going to be doing. I was going to hang out at the pet food store on 23rd Street until I saw that owner and her vicious dog. Confront them. Give the owner a piece of my mind and then some. I had a vision of a Pekinese pancake if he gave me any of his guff. I would avenge this despicable outrage done to my poor, sweet, beautiful dog. This injustice would not stand.

Justice. Was that what I wanted? When I got home Millie greeted me with her usual good cheer, bloody snout and all. She presented me with her favorite toy. She was wagging and smiling, exuberant as only a Golden can be. So happy, happy in the most pure and basic way. Whatever unpleasantness her day had held, she’d moved far past it. She lived in the moment and the moment was good, especially when I gave her extra treats for her terrible ordeal.

Justice. No, that’s not what I wanted. I wanted revenge. I wanted an outlet for my seething anger. I didn’t know if I would even be able to sleep that night.

Later, as I applied the salve to Millie’s nose, I took a closer look at my feelings… and at my dog. Millie was fine. She was at peace. Was I? I don’t know if Millie had forgiven that Pekinese. I don’t know if dogs operate that way. But she certainly wasn’t brooding or holding a grudge. Could I say the same?

I wasn’t really going to stalk the Pekinese at the pet store all weekend. I wasn’t going to turn it into a Pekinese pancake and dress down the apparently clueless owner. What I was going to do was take a deep breath, close my eyes, say a prayer and ask a Power greater than myself and my anger to help me forgive. I’d never prayed for such a thing, to forgive a Pekinese. This was a first.

But it worked. Millie curled up beside me as if to say, It’s all right, that little dog was just scared, don’t be so mad, I’m OK. I needed to let it go and I did, though it took a couple more prayers and a pint of SoCo ginger ice cream, a little of which I shared with my maimed Golden girl. She was quite content. And it occurred to me that in so many ways my dog is a better person than I am.

The Birth of Jesus: A Christmas Story Told Through Bible Verses and Illustrations

Now a grandfather, Rick Hamlin reflects on how faith played an important role during Christmas time with his kids.

The film and TV producer shares how family and community helped him cope with the childhood loss of his father to alcohol addiction.