The day that changed her 8th grade son’s life.

Most of us remember where we were that day.

My morning had started off a little calmer than usual. It wasn’t my week to drive in our neighborhood carpool, so I’d rushed the two youngest out the door to grade school first. Then the car horn sounded for our oldest son and, after a quick hug, he was off to middle school.

I’d gone back upstairs to finish getting ready. I’d be volunteering in the office of the middle school. The morning news played in the background, but my attention was on getting out the door on time. Then my cell phone rang.

I checked the caller ID and answered immediately. My close friend had recently moved to Wisconsin (from Eastern time zone to Central), and this was too early for a social call. I was right. She didn’t even bother with hello. 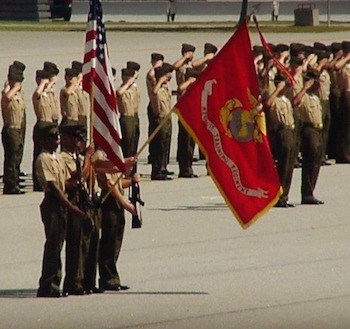 “Did you see it? Have you heard about the World Trade Center?”

Those words were echoing around our country as we all tried to make sense of what we saw. I went on in to help at the middle school and was glad I had. It took all of us when the school was ordered into lock-down. Throughout the morning more details became available about the attack on the World Trade Center towers, and parents began arriving to pick up kids early.

But what does this have to do with my time as mom of a Marine? My son was only in middle school. He wasn’t part of that conflict. But that day was one of the deciding factors for my son becoming a Marine.

Even though he was only in 8th grade, that day had a profound impact on him. That event propelled him, and thousands of other young people like him, to become part of the solution instead of innocent bystanders.

That day, as I watched the towers come down, I knew that life in America had changed dramatically. The old ideals and that sense of invulnerability had collapsed as surely as the north and south towers. What I didn’t know was how it would change our family personally.

Veterans Day: A Time for Gratitude

My husband returned home from a yearlong deployment 15 years ago. On Veterans Day, I’m especially aware of how lucky we are.

Marine veteran and long-distance runner Micah Herndon shares how he is preparing to compete in his first New York City marathon on November 3, 2019.

Micah Herndon on How Faith Helped Him Survive

The Marine veteran recalls how Sarah McLachlan’s In the Arms of an Angel reassured him when he regained consciousness following an IED explosion in Afghanistan.