He never thought this would happen after returning a historic home-run ball.

The legendary call of Bobby Thomson’s home run that put the New York Giants in the 1951 World Series echoed last week when Travis Ishikawa put his San Francisco Giants in the World Series with the first National League pennant-winning walkoff homer since Thomson’s blast 63 years earlier. But what happened after Ishikawa’s three-run homer may be nearly as remarkable as the hit itself.

Frank Burke, an Oakdale, California auto transmission shop owner, ended up with the home run ball after it flew into the right-field stands. The longtime Giants fanatic had two options: Hold onto his ultimate fan keepsake or sell it. In recent years, significant home run balls have sold for as much as $3 million. 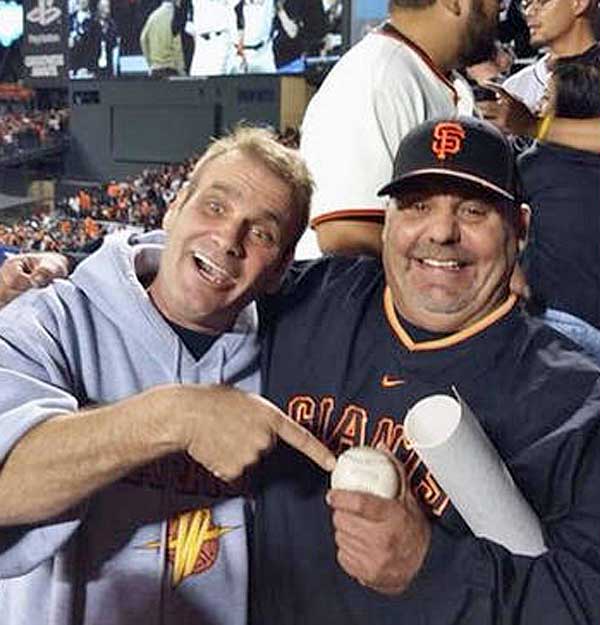 Burke did neither. Instead, he decided to give the home run ball to Ishikawa. While friends and fellow fans were scratching their heads at Burke’s generous gesture, the shop owner felt it was the only choice he could make.

“He’s the one who hit it and sent us to the World Series,” Burke told the Modesto Bee. “I was just the lucky one who caught it.” Burke said he felt he was doing the right thing in giving the ball back, telling the Associated Press,“I believe in karma.”

When getting the ball authenticated with Giants’ officials after the game, Burke, hoping to cash in on that good karma, did ask if he might be able to get some World Series tickets. He was quickly shot down, but “that was all good,” the Oakland resident told his hometown paper. “I didn’t really want anything.”

Perhaps Burke’s decision of asking for nothing in return and simply doing what he perceived as the right thing has something to do with why he was in the stands in the first place. The lucky fan took lifelong friend Greg Leutza to the game to give his fellow Giants fan something positive in his life. Leutza is battling cancer and had a chemotherapy session earlier that week. “He’s my hero,” Burke said of Leutza.

The two fans chose to attend Game 5 on Thursday, as opposed to Games 3 or 4, because Leutza’s chemo session was on Tuesday and attending Game 5 would give his friend a chance to get his strength back after the grueling treatment. Going to the game gave Leutza something to look forward to and the two friends a chance to enjoy watching their favorite team play. It also gifted Burke a chance to honor his friend.

After his lucky catch, Burke ended up being able to meet with Ishikawa for a nice photo op with the ball and Ishikawa handed Burke an autographed bat in return, but when word spread of how Burke returned the ball – and why he was at that game in the first place — the Giants got him those World Series tickets he hoped for. He received four box seats right behind home plate and the team also put his family up in a San Francisco hotel suite.

Then the Giants went above and beyond what anybody could have dreamed. They gave Burke the honor of throwing out the first pitch at Game 3 of the 2014 World Series. Such a privilege is usually reserved for celebrities, U.S. presidents and MLB Hall of Famers, not regular fans. But the team felt Burke’s generosity of spirit was worthy of the role.

To top it all off, Burke, who attended the game with his wife and Leutza, gave his last ticket to Leutza’s daughter instead of having one of his own four children or four grandchildren attend the game. “That was probably the best thing to do with the ticket,” Burke told the Modesto Bee. “I’m hoping that if nothing else, my kids learn about generosity and the feeling you get from giving more than receiving.”

Magic Johnson on Why “Faith is Everything” For Him

The NBA legend discusses the importance of faith and his new documentary, “They Call Me Magic.”

The Power of the Underdog

Inspired by a scrappy Saint Peter’s basketball team, we too can come out of nowhere to fight overwhelming odds.

Bubba Watson: How Faith Helped Him Conquer His Anxiety

Champion golfer Bubba Watson’s success on the PGA tour was nearly overshadowed by a lifelong disorder.