Lions in the Sun

My house cats remind me of their bigger feline cousins. Little did I know there was an inspiring link between them.

It’s a hot summer here in New York City, no doubt about it! Normally, my cats, Sal and Dean, love warmth so much that they sleep on the hot radiators in wintertime. But even they are feeling the 90-plus degree heat of the past few weeks. Every day I come home to them stretched out lazily: 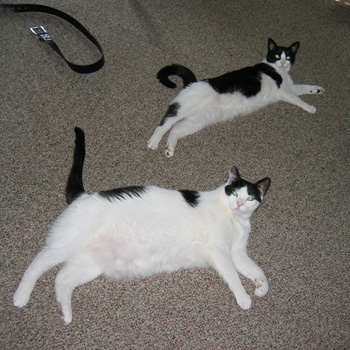 It reminds me of lions basking in the sun on the scorching South African veldt.

I recently watched a program on the National Geographic channel called, Cats in the Womb. It’s a fascinating look at how cats develop in utero, highlighting the genetic similarities of the housecats we love and their bigger feline cousins—lions, tigers, cheetahs, leopards, etc. Intrigued, I went poking around on the internet afterward to find out more.

I learned that the population of “big” cats is dwindling toward extinction! The lion population worldwide has gone from 450,000 to 20,000 in less than 100 years, according to National Geographic, while about one third of every American household has at least one domestic cat (we’re talking millions of kitties). Scientists say human population growth may have a lot to do with the decreases in big cat populations.

It turns out our kitties can do something to help save their big cousins—through the Little Kitties for Big Cats initiative! The National Geographic Society is collecting donations that will go toward restoration of the world’s big cat populations (their Big Cats initiative). Cat lovers can donate in honor of their favorite little kitties, whose photos and bios will be featured online!

Hopefully it will go a long way so that more cats—big and little—can bask in the warmth of a summer sun!

Also, if you’re worried about your little cats and the heat, check out the ASPCA’s Hot Weather Tips for keeping them safe and cool.