Why this feline duo loves to watch football on television.

So this week has been a week of anniversaries in our household, and many prayers of thanks for the forces that have brought us all together. And to celebrate, we all watched football on New Year’s Day!

It all started 6 years ago. Sal and Dean were about 8 weeks old when my husband, Rick, adopted them, and brought them home. It was New Year’s Eve, and he had chosen to spend a quiet evening in playing with his new kittens instead of going out with friends.

The next morning he settled in on the couch with both kittens draped across his lap, and turned on the TV to watch the University of Florida Gators play in an NCAA bowl game. Hours later, not one of them had even moved an inch. 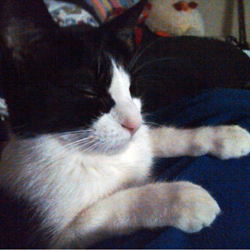 Rick is a huge Gators fan, and is known to get very heated (and shout with excitement) when he watches their games. The fact that these fragile little kittens were not frightened by this was a sure sign that they’d found the right forever home!

And so it has been for six years now. When we watch football games, both my husband and I get excited and jump around and shout. Sal and Dean sit calmly beside us, watching the action unfold.

But if Tim Tebow scores a touchdown or the Northwestern Wildcats’ defense (my team) recovers a fumble, and we erupt in cheers loud enough for the neighbors to hear, my own (wild)cats remain perfectly still, engrossed in the gridiron drama.

Do your cats like to watch sports on TV? We want to know if there are some fellow kitty football fans out there! Email us at lovedemcats@guideposts.org.