Sometimes we all need to be reminded of the power of prayer. Just take the case of Daisy, the missing Chihuahua…

We talk so much at Guideposts and OurPrayer about the power of prayer, you’d think it would be our first resource, but well, we’re probably just like you. Sometimes we need to be reminded of it.

Let me tell you about my colleague Sharon Azar. Sharon loves animals and works hard in her free time rescuing pets that have been abandoned or abused. It’s the calling of a saint, if you ask me, although Sharon will make no claims to that status. 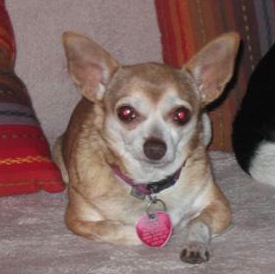 The other day she was very much concerned about her friend’s Chihuahua, who was lost in the woods of South Jersey. Daisy, a 12-year-old Chihuahua, is a rescue dog and skittish around all people. Her owners had tried for days to lure her from wherever she was hiding, calling her name, carrying treats. To no avail. After five days in the wilderness, they were ready to give up. With all the predators in the woods, coyotes, hawks, Daisy probably wasn’t even alive anymore.

Then Sharon remembered the name of a policeman she knew in South Jersey: James. If she gave James a call, maybe he’d send out the troops and they’d find Daisy. Sharon called James and told him the whole story.

“Why don’t we pray about it?” James said to Sharon’s surprise.

And James, this tough cop, prayed with Sharon over the phone. “I don’t even remember what he said,” she told me, “but it was so beautiful and lovely. I guess he just asked for God to keep watch over Daisy and help her get to safety.”

Not more than two hours later, Sharon got a call from Daisy’s owners. “We found her!” they said jubilantly. “Somebody was walking through the woods with another dog and that was just the thing to lure Daisy out of her hiding place.” After five days with little to eat or drink, Daisy was frail and shaking but was happily reunited with her owners.

“Did you call James back and tell him the good news?” I asked.

“We should make him a prayer volunteer,” I said.

Are you in need of prayer? Send your prayer request to OurPrayer, a prayer service of Guideposts, and caring volunteers will pray for you.