When God calls us home, he puts steppingstones to heaven right in front of us.

A while back, I was in charge of raising money to serve hospice patients in our care who had no resources to pay for themselves, with the help of a group of young professionals known as Esprit de Corps. The group’s board of directors was made up of lawyers, CPAs, public-relations directors and banking specialists, all of whom were very compassionate, connected and caring.

Among them was a young man named Kevin, whom I thought especially wonderful. He was quiet by nature, always with a helping hand and winning smile. No task was beneath him—carrying boxes, decorating, moving props and anything else that would make their events spectacular. Esprit raised more than $1 million  for our hospice program. 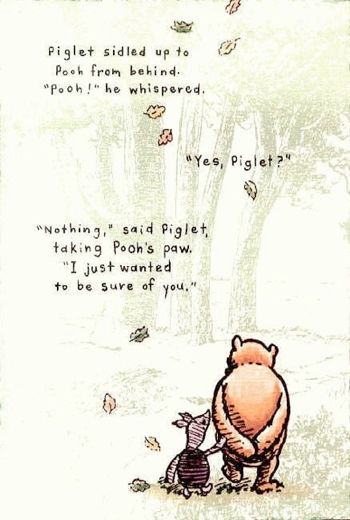 During that time, Kevin was going through some very painful personal times, and he often spoke to me about them. He had a great mind and heart but trusted me enough to bounce his thoughts off me. One day I received a card in the mail from him that I still treasure. The cover showed Piglet and Pooh walking and talking. Inside the card, it read, “I just wanted to be sure of you.”

A year or so ago, a mutual friend asked if I knew whether anything was wrong with Kevin, who had called and asked for my phone number, since he had moved to North Carolina and lost track of it. Just a few weeks later I heard that Kevin had died in his sleep; his wife had found him in the morning, looking ever so peaceful beside her. She told me that she had noticed my book Glimpses of Heaven on his desk and knew he had been reading it lately.

The Piglet and Pooh card came to my mind right away. Was Kevin reaching out again, through my book, to make sure his friend was still there—or was he looking for another much more important friend now? Although Kevin and I did not speak to each other then, I think God allowed him to hear about Him again through the stories he loved to hear me tell so many years ago.

When God begins to call us home, we know it, and he puts steppingstones to His heart right in front of us. Kevin had heard about heaven, its beauty and its reward many times in Glimpses of Heaven. He knew well the God who created and loved him and he loved him in return. Here he was, looking over his shoulder again, this time saying to God, “I just wanted to be sure of you.”

Join the extraordinary Witnessing Heaven series and take an unforgettable journey through the stories of real people, just like you, who took a miraculous journey to heaven and back. Some of the books in the series are:

You can join the series and save $2 per book, or you can purchase each book individually.

Jesus Spoke to Her During Her Near-Death Experience

She was in a loveless marriage and battling depression, until an NDE showed her God’s unconditional love.

She Encountered Angels During Her Near-Death Experience

After she crossed over to the heavenly realm, she was greeted with a deep love that made her purpose in life clear.

These inspiring firsthand accounts of heaven shed light on the peace, glory and love that awaits us in the afterlife.