How a Heartbreaking Story Inspired Hope

A beautiful gift revealed the power of a true story—one that nearly wasn’t told.

On the surface, it was a simple, miraculous story that arrived in my mailbox this time last year. A little boy had fallen from a second floor window onto the concrete driveway below; his parents prayed by his hospital bed, told by doctors to prepare for the worst. Then the boy rose, mysteriously unbroken, despite x-rays taken moments earlier which had indicated otherwise. It was a miracle that happened decades ago, but one that Wes, the boy’s father, would never forget. Which is why he sent it to Mysterious Ways.

There’s a lot of behind-the-scenes work that goes into preparing every story for publication. The first thing we do is call up the authors and get the information they may have left out—those little details that provide context and help the reader better understand what the author experienced. I called Wes, and after we spoke for a while, I asked if I could speak with his son, Paul. The other editors and I wanted to include his perspective on what had happened to him when he was just a boy, hoping it could add a different point-of-view to the narrative.

That wasn’t possible, Wes said. I could hear the pain in his voice; he was reluctant to go on. Finally, he revealed what was missing from the story he sent us. He hadn’t spoken to Paul in years. His son struggled with alcoholism and had been in and out of Alcoholics Anonymous. Wes now helped raise Paul’s young daughter. He wasn’t even sure where his son was.

Read More: A Father’s Prayer for His Alcoholic Son

Yet, with all of his son’s struggles, Wes still held out hope that Paul could find healing. He’d seen it once before, against all odds, in that hospital room.

That became the story we told in Mysterious Ways. And it was the story that so deeply moved one of our readers, 77-year-old Sara Thomas of Alpharetta, Georgia.

Sara lives in an assisted living facility. To pass the time, she’s an avid scrapbooker and cross-stitcher—and a reader of Mysterious Ways. Sara had been “drowning in negativity” when she picked up the June/July 2016 issue. Then she read Wes’s story. His experience and outlook resonated with her. 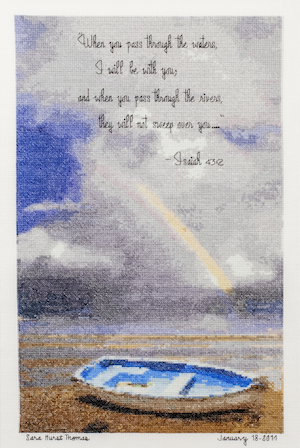 Turning the page, she saw the image we’d chosen for our “Comfort & Reassurance” section, a boat on a beach beneath a stormy sky, with a rainbow in the background. Inspiration struck—she was determined to do a cross-stitch that combined Wes’s favorite Bible verse, Isaiah 43:2, and the photo. She called to ask permission. “The storm clouds reminded me that into each life some rain must fall,” Sara said. The grains of sand made her think of the sands of time. “Like the patch of bright blue, better days are right behind the bad ones.”

Four and half months—and 63,000 stitches later—Sara sent us her masterpiece, which we forwarded to Wes.

“I read the letter from Sara and decided to give her a call and we spoke for awhile on the phone,” Wes wrote to us. “Isn’t it amazing how God works? He inspires a lady in Georgia, after reading my story, to create a cross-stitch just for me.” He hopes his story continues to touch others, including his son.

“Perhaps someone who subscribes to Mysterious Ways may read the story, show it to Paul—and who knows from that point, what God would choose to do in his life, once again.”

It’s not the first time our spirits have been lifted by the way our readers have responded to a story in our pages. We love to hear from you.

What story has inspired you to take action? Let us know.