How an Adopted Cat Saved His New Owner’s Life

Someone’s responsible for the true miracle of “Pudding” a cat in the right place to save a life.

Amy Jung of Sturgeon Bay, Wisconsin, didn’t plan on adopting a cat. She only went to the Door County Humane Society on February 8 with her son, Ethan, to play with the animals.

But one feline caught her eye. A hefty orange-and-white furball, lying on a counter. Amy asked an employee about the cat. Pudding was 8 1/2 years old and had two previous owners, a family who gave him up because their son was allergic and an older woman who had passed away.

Pudding instantly bonded with Amy and Ethan. Amy couldn’t explain it. She just felt a strong connection. That day, Amy decided Pudding had to come home with them.

Pudding didn’t act skittish at all when he entered his new home. It was like he belonged there. 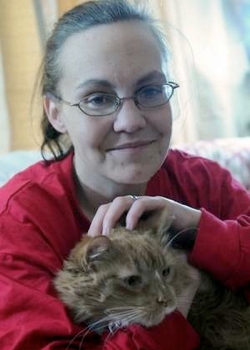 Amy went to bed that evening around 9:30. A little more than an hour later, she awoke with a start.

She felt pressure on her chest. Pudding was on top of her. He was swatting at Amy’s face, nipping at her nose. Amy tried to move but couldn’t. She realized that her arms and legs were shaking uncontrollably. A diabetic since the age of four, Amy instantly knew what was happening. She was in the middle of a diabetic seizure.

Pudding was helping her come out of it.

Amy called for help and Pudding leapt off her chest, running out of the bedroom. He ran to Ethan’s room and jumped on the boy’s bed. Ethan woke up and heard his mother’s call for help.

If there had been any type of delay in getting Amy the glucose shot she needed, she could have gone into a coma. Amy’s doctor said Pudding’s quick actions saved Amy’s life.

At her doctor’s suggestion, Amy had Pudding registered as a therapy animal. An official title to go with the one most people are applying to Pudding: Hero.

We know that animals have the incredible ability to detect when something is wrong. Is it something biological? Just instinct? Perhaps. But why did Amy feel so drawn to Pudding at the shelter? Why did she bring her home that day? That’s something to wonder about.

Keep sending your Mysterious Ways stories to mw@guideposts.org. We always love to hear them, and we’ll publish the best on our website and in our Guideposts publications.