Here’s the amazing tale of how the sibling of an assassin rescued Abraham Lincoln’s only surviving son.

History is full of mysteries, the fates of nations pivoting on an unexpected and seemingly random turn of events. One extraordinary moment in American history happened on a train platform in Jersey City, New Jersey, in the darkest days of the Civil War. Abraham Lincoln’s oldest son, Robert, a 20-year-old Harvard student, was waiting for a train when a rowdy crowd put him in mortal danger.

“There was a narrow space between the platform and the train car,” Robert later recalled. “There was some crowding, and I happened to be pressed by it. The train began to move and I was twisted off my feet, and dropped, with feet downward, into the open space, and was personally helpless…”

President Lincoln and his wife, Mary, had already endured much tragedy. They lost their son Eddie when Honest Abe was still a rising Springfield lawyer, and Willie, a much-doted-upon 11-year-old, had recently died of typhoid fever, throwing the president and the First Lady into a deep depression. Their youngest son, Tad, was often sickly (he’d end up surviving his father by only six years).

Is it any wonder that Mary was so protective of her eldest, Robert? She protested against his enlisting, much to his dismay. But that evening in Jersey City, it seemed Robert was destined to become another tragic death in the saga of the Lincoln family. 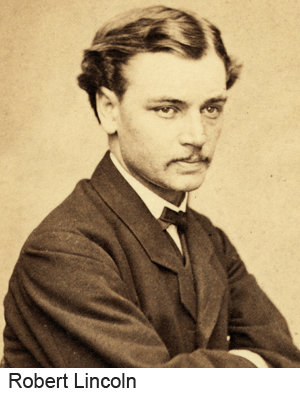 The train lurched, coming close to crushing Robert, when he felt someone tug his coat—“vigorously seized” it, as he later wrote—jerking him back up onto the platform and out of harm’s way. Robert’s rescuer had no idea whose life he’d just saved, how important a role he’d play in the course of both a family and a nation. But Robert never forgot that man. How could he?

Robert went on to have a distinguished career. He managed to enter the Union Army late in the war, serving as a captain under Ulysses S. Grant, and was an eyewitness to Robert E. Lee’s surrender.

On April 14, 1865, he was in Washington, D.C., but decided not to join his parents at Our American Cousin at Ford’s Theatre that terrible night, when John Wilkes Booth emerged from the shadows and took President Lincoln’s life. Robert later served as secretary of war in one administration and minister to England in another. He was often recommended as a presidential candidate.

The sole heir to the Lincoln name, he corresponded with his father’s biographers, providing tremendous insight into the Lincoln presidency. He died at the age of 82.

Robert was forever grateful to his rescuer. While the man hadn’t recognized him, Robert had known exactly who the man was: one of the greatest Shakespearean actors of his day. An adamant Unionist, who had proudly voted for Lincoln, the actor was devastated when the news of the president’s assassination reached him.

For a time, he retired from the stage, refusing to perform, until a letter from a friend, who’d heard the story from Robert, told him the identity of the young man he’d rescued. The truth helped inspire the actor’s return to the stage.

While John Wilkes Booth would forever be known as a notorious assassin, his brother Edwin Booth is remembered today for defining Shakespearean characters for American audiences, founding his own theater, donating his home as a club for actors and artists…and saving Abraham Lincoln’s only surviving son.