The Sword of the Spirit

Even though Jimmy flirted with disaster, I knew he never hesitated to live out his faith…

For although we are walking in the flesh, we do not wage war in a fleshly way. (II Corinthians 10:3)

Our oldest son was a wild child during his teenage years–never in serious trouble but always on the ragged edge of crossing the line.

Even though Jimmy flirted with disaster, I knew he and his friends never hesitated to live out their faith. One night they had an encounter they will never forget.

Several of them were staying with a friend, and before they settled in for the night, they couldn’t resist one more ride in Jimmy’s Jeep, though it was well past midnight. As they drove dark country roads, inevitably a county deputy pulled them over, checking for mischief.

Three of the boys were big jokesters, but one of the four never seemed to say a word. Unfortunately he chose this night to break through his shyness. Just as the officer was passing their open window he commented to his seatmate, “I hope he doesn’t make us walk a straight line.” Despite a sharp jab from his friend, the damage had already been done. They were all ordered out of the car. 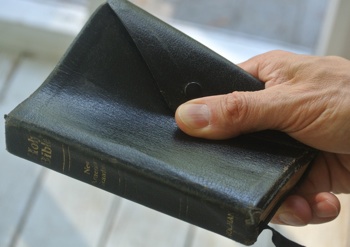 The policeman proceeded to search the car, with my son’s permission. He found nothing illegal or even slightly damaging, so he turned his attention to each of them individually. As he patted them down, the situation quickly became comical. One of my son’s friends–wearing cargo shorts–dutifully emptied his pockets. Of course he forgot one. When the officer reached that pocket, Ryan’s sense of humor got the better of him: “Be careful, I keep my sword in that one.” My son said the policeman visibly flinched, then demanded Ryan remove the weapon. Ryan proceeded to extract his well-worn Bible for the deputy’s inspection. At that point the officer realized he’d find nothing incriminating with that group and ordered them on their way.

As my son shared the story with us the next day, I couldn’t help but be challenged. God has given us his Word for protection and offensive warfare, but how few of us view it in that way. We use it for comfort and instruction, but it’s meant to be so much more. During these times of deployment, it has become my weapon of choice when fighting my own war at home. Many times it has defeated the enemy of fear.

Keeping the Faith: Back to School

Guideposts’ Vice President of Ministries reminds us that we should continue to remain students of God’s wisdom throughout our lives. Continue Reading Keeping the Faith: Back to School

The pastor and bestselling author reminds us that faith bolsters our hope even in the most tumultuous of times.

Guideposts’ Vice President of Ministries shares how her spirits are lifted by the summer sun—and God’s light.