An idea so goofy, outlandish, challenging and impossible that it could have only come through prayer.

I was late getting to work that morning. Had a hectic morning getting out of the house and was feeling out of sorts. Prayer on the subway wasn’t much help. “You need to sing a song,” I told myself. Singing always makes me happy. “Film it this time too.”

I’d been toying with the idea for a while–60 Songs in 60 Days. What if I filmed myself with my cell phone singing 60 songs in 60 days? I could post each song to Facebook and Twitter.

It was such a goofy, outlandish, challenging, impossible idea that it could have only come to me in prayer. Did I even know 60 songs? Should I start making a list? Shouldn’t I map it out? 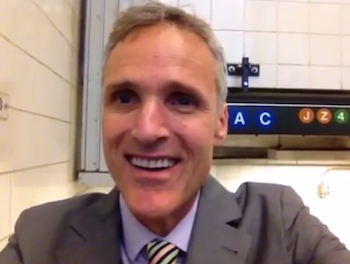 Nope, just do them one by one. The songs will come to you. Just sing a song every day.

So that day, Day One, I stepped out of the subway and stood on Fulton Street with the Freedom Tower behind me and held up my phone and started belting out, “Precious Lord.”

READ MORE: SING ALONG WITH RICK!

Now that I’ve posted many of these songs, people have commented, “What do people do in New York City when they see you singing to your phone? Don’t they think you’re nuts?”

Quite frankly, I don’t want to think about what they’re thinking, but no, nobody has stopped me yet. And a couple times people have said, “Nice singing.”

That day “Precious Lord” was the song I was meant to sing and it cheered me up immensely. I looked at the video of me and started laughing.  Goofy idea indeed. Day One of #60SongsIn60Days. 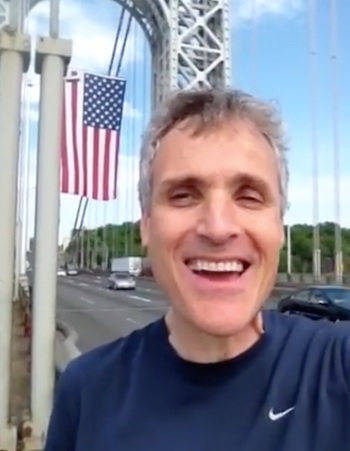 People are surely humoring me with their “likes” and comments: “beautiful,” “good job,” “my favorite yet,” “I look forward to your songs every day,” “It’s like an Advent calendar,” “Do you take requests?”

My answer to the latter is, “Yes, if I know the song.” Somebody requested something from Lerner & Lowe’s Brigadoon, a musical we sang in high school. I sang “Through the Heather” in the heather garden at our nearby park.

My niece’s kids asked for something from Mary Poppins. I had a dentist appointment near St. Patrick’s Cathedral and so I sang “Feed the Birds” from Mary Poppins with the looming cathedral behind me, a stand-in for St. Paul’s in the movie.

It started to rain as I headed home one evening. Perfect for “Singing in the Rain.”

The quality of the sound, I have to admit, isn’t great. You can hear the rumble of New York traffic and people shouting and air conditioners humming in the background. But every time I feel just like the psalmist said, making my joyful noise to the Lord.

Come find me on Facebook at RickHamlinPrays or on Twitter @Rick_Hamlin. Join the party. Glad to take requests. As long as I know the song.

The singer and songwriter shares how her faith—and a particular spiritual practice—helped her get through a health crisis.