Rend Collective Is on a Worship Mission

The Christian worship band from Northern Ireland continues to push boundaries on their latest album As Family We Go.

According to Rend Collective, there are a lot things the Irish are known for – sausage and sarcasm make the top of the list – but being “professional” isn’t one of them.

That may be why the Christian worship band from Bangor, Northern Ireland seems so unrestrained when they perform live. It’s also the reason why they started making music in the first place – they wanted to lead people in authentic worship.

Group members Gareth Gilkeson, Chris Llewellyn, Ali Gilkeson, Patrick Thompson and Steve Mitchell began playing together 13 years ago as a part of a larger worship band at Rend, a ministry of young college students hoping to draw their peers back into the church and make the Gospel a lifestyle as opposed to a Sunday morning ritual.

“We noticed a lot of people were leaving church when they reached 18 or 19 years old,” drummer Gareth Gilkenson tells Guideposts.org. “There wasn’t something for people in their 20s and early 30s. Our church had become very professional and we had found that there was a disconnect. [Young people]were looking for the reality of connecting with God.”

While lead singer Llewellyn lead worship, Gareth ministered to his peers. Music was played at every gathering, but it didn’t occur to anyone that the songs being sung every Sunday could ever become a career for anyone in the group.

“We were all musicians, and we had all played in other bands, but it wasn’t the idea at the start,” Thompson, who plays bass for the group, says. “I don’t ever remember thinking that I was going to have a career this way.”

Just six years ago, the band formed what is now Rend Collective and began writing their own songs and producing a couple of records before their first and critically acclaimed 2010 album, Organic Family Hymnal was released. Their live acoustic album, Campfire showcased their originality and passion to build community and intimacy with their music.

Comprised entirely of acoustic songs recorded around an actual campfire, the album – which landed on top of the Christian music charts when it was released — sported a unique mesh of Irish Christian folk rock songs with catchy hooks and meaningful lyrics steeped in Biblical rhetoric. 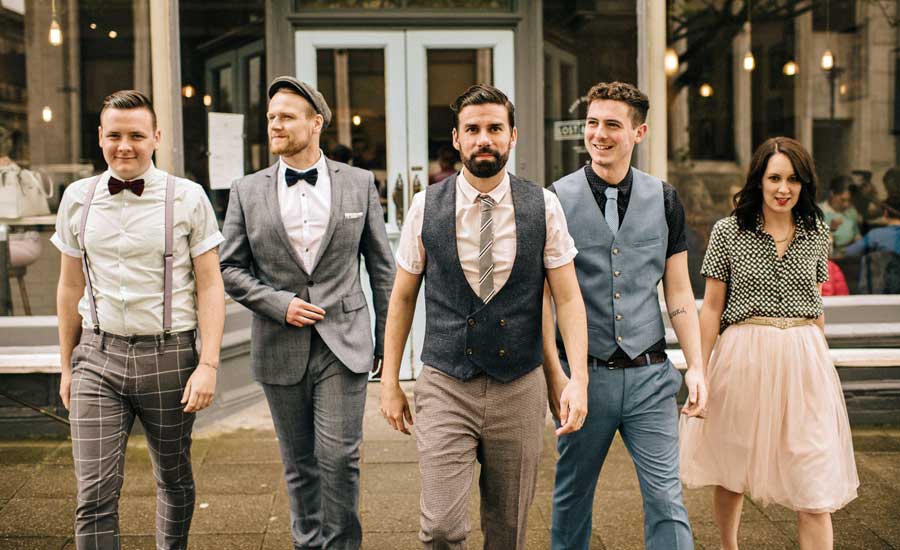 But having so much success early on meant the Christian music group wanted to challenge themselves even more with their follow-up release. The Art of Celebration, the band’s fourth album, debuted number one on the Billboard Christian Music charts and spoke to the group’s desire to be classified as a Christian celebration band rather than just Irish folk singers.

“What people always connect with us is the idea of joy and celebration,” Gilkenson explains. “We realized this is part of our story. This is what people find unique and helpful about what we do, so we should magnify that and focus on that.”

Now they’re gearing up for the debut of their fifth record, As Family We Go, which drops August 21st. The album — already number one on iTunes’ Christian Albums chart — touts quick-tempo tracks grounded heavily in Irish folk roots with verses that speak to their faith and hooks that sing like anthems.

“We’ve tried to push those boundaries a bit more, but still keep it in the context of church,” Gilkenson says of the new music. “There’s nothing more powerful than the church. We write church songs that worship leaders can get up in their congregation and sing. That’s our focus. We want people to be able to walk in off the street, hear our music and go ‘I feel at home here. I don’t feel out of place.’”

The band continues to provide the soundtrack to worship experiences, recently playing to sold out shows on Chris Tomlin’s Worship Night in America tour before heading back across the pond to tour in the UK. Not bad for a bunch of Irish musicians who used to minister to pub goers and had to pay for their own petrol when making their church rounds.

“That’s the most exciting thing about us is that we’re an international band,” Gilkenson says. “We get to travel, which just adds a wealth of experience.”

Ultimately, the group just hopes their music can help others searching for their way to a deeper relationship with God.