For a day in the life of a mom, it’s as Forrest Gump famously said, you never know what you’re going to get!

In the opening scenes of the movie, Forrest Gump, Tom Hanks, who plays Forrest, is sitting on a bench with a box of chocolates on his lap. Soon, a woman sits down on the other side of the bench.

The woman never even looks up from her magazine.

“My mama always said, ‘Life was like a box of chocolates,’” he continues, while chewing a piece of chocolate. “You never know what you’re gonna get.”

There’s a lot of truth in that bit of dialogue. 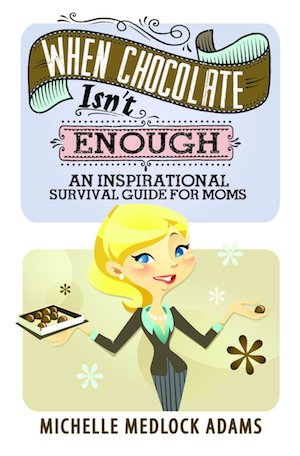 I also think that parenting is a lot like a box of chocolates. Some days you get your favorite caramel nut, milk chocolate covered piece, and other days you bite into the nasty orange cream filled piece! Not every day can be a caramel nut, milk chocolate kind of day. Nah, you have to have a few orange cream filled days to make you appreciate the really good ones.

I remember one of those “orange cream filled days” very well. I dropped off Ally, who was in middle school at the time, at our cousin’s shop to get her hair trimmed and highlighted while I went to my business luncheon. At the conclusion of my meeting, I noticed that my husband had called several times.

“Everything OK, babe?” I asked.

“Uhh…what was Ally supposed to get done to her hair?”

“Trimmed and highlighted, why?” I asked, nervously.

I sped home, and when I walked into Ally’s room, I saw it. Her once long hair was cut in short layers on top, sticking up sort of like a Punk Rock rooster. The back remained long but thinned out somehow, reminiscent of a grown out mullet. I just couldn’t figure out what had happened.

“Did your hair break off in the foils?” I asked

I left her room and called our cousin, who is an amazing stylist, to find out what had happened. I knew there had to be an explanation for this horrendous hairdo.

Turns out, my little Barbie doll daughter had decided she didn’t want to look like a Barbie anymore and printed a picture off the Internet, took it to our cousin without me knowing, and said, “This is how I want my hair.” He, of course, thought I had approved.

Ally was happy; I was not.

I had to ground Ally for lying and being sneaky, although I felt like her horrible hair was punishment enough. Later that night, as I was telling the girls goodnight, I asked Ally: “Honey, why did you want to do that to your hair?”

I hadn’t even considered that, but all at once I understood. We had moved the girls from Texas back to Indiana during their middle school years, making them leave their cheer squads, their best friends, and their school—a school where they were popular and knew everyone. Ally wasn’t adjusting as well as I’d hoped.

I hugged her and told her I understood. We prayed together, and I asked God to heal her heart and send her a best friend.

Not long after, a pretty little girl with big brown eyes and the same crazy haircut showed up at our house. Her name was Jill, Ally’s new best friend. God had answered our prayers.

He’ll answer your prayers, too.

So, if you’re having a run of orange cream filled pieces, hang on! A caramel nut, milk chocolate piece is on its way.

Lifestyle expert Katie Brown reminds us that every rite of passage is a chance for both parents and children to grow with God.

Could He Trust God to Oversee His Family’s Hiking Journey?

What he thought would be a coming-of-age experience for his kids proved to be a spiritual lesson for him.

A Mother’s Tips for Talking to Kids About Drugs

Author Christine Naman, whose teenage daughter struggled with addiction, discusses actions parents can take to decrease the likelihood that their children will get involved with alcohol and drugs and to help them get sober if they do.