Caleb Holloway wants people to see the new Deepwater Horizon film if only to know the names of the friends he lost during the disaster.

The film Deepwater Horizon has drawn critical praise for its gripping story of the 2010 explosion and fire on the oil rig of the same name, just off the Louisiana coast.  Many Americans remember the story unfolding on their TV screens, as the crippled rig dumped 50,000 barrels of oil a day into the Gulf of Mexico, killing wildlife and threatening the ecosystem.

For Caleb Holloway, who worked on the rig and served as a consultant on the film, it was a story of tragedy and survival, one that changed him and, at times, challenged his faith.

On April 20, 2010, Holloway was just 28 years-old, newly married and looking at a possible promotion in his department, when the rig caught fire. While most of the world remembers the aftermath of the spill, he still battles with the effects of living through it.

“It’s hard to think back and focus on one thing because there were so many things happening,” Holloway tells Guideposts.org. When the rig exploded, 126 men and women were on board – 11 would perish before the flames were finally put out.

“Just the fact that so many people survived something like that is incredible to me,” Holloway says “Eight of the guys that passed away, that was the crew I had worked with for years  Of course the environment is important to me, but that was all that the focus was on. I don’t even remember hearing the names of my friends that passed away in the news. I think it’s important for people to know their names.”

Though it’s been six years since the tragedy, Holloway still gets choked up recalling the friends he lost on the rig. It’s why he agreed to take a call from Peter Berg when the director first contacted him about making a film documenting the disaster.

“I wanted to make sure he had talked to all the families and that they were on board before I committed to it because that was very important to me – that they were okay with what he was going to do,” Holloway recalls.

Holloway agreed to participate and saw the film as a way to honor the friends he lost. Working on the movie and seeing the final product was challenging for Holloway, who relived his own experience when he first saw the film. 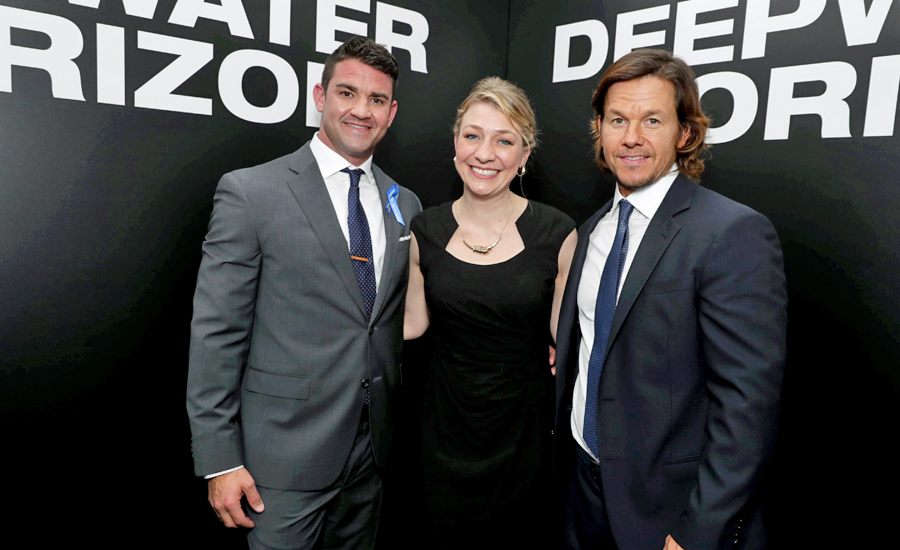 From Left: Caleb Holloway, guest and Mark Wahlberg at the premiere of Deepwater Horizon

Holloway was on the upper deck when the blowout happened. He got to a lifeboat, helping others to safety along the way. When he got off the rig and onto a rescue boat, he helped triage fellow crewmen while everyone waited for news of any more survivors. He was hoping to hear the names of his friends, guys he had worked with on the rig for the three years he’d been there. No news came.

The survivors sat for hours on the boat, watching the rig burn as the Coast Guard did its final rescue sweep. When no one else was found, the crew gathered in the middle of the boat.

“A lot of us joined hands and said a prayer for them,” Holloway remembers, “That’s when it sunk in that those guys were gone.”

Holloway was able to send a text to his wife, letting her know he was okay. She had been driving to hospitals around Louisiana, asking if any of the crew had been admitted. He would see her a day after the explosion, in a hotel where the families were gathered to welcome back their loved ones.

Holloway remembers walking through that lobby, rounding the corner and seeing the wife of one of his good friends, Roy Wyatt, an assistant driller. The two went hunting together. Holloway often stopped by Roy’s house and spent time with his family. Roy didn’t make it off the rig that night.

“I was so emotional at that point, I just couldn’t face them,” Holloway says.

He went home and tried to recover. A few FBI and ETA agents stopped by the house, asking questions and warning him he may be subpoenaed in the investigation that would follow the oil spill. Holloway credits his family and a local men’s Bible study with helping him get through that difficult time.

“I found myself questioning God,” Holloway admits. “‘Why would you take these innocent guys away from their families? Why wasn’t it me?’ I was constantly asking those questions. Several months later it was like a light switch flipped on. ‘Who am I to question anything?’ I had to accept it. I had to embrace it and move forward.”

His wife told him something that helped.

“My wife told me ‘God’s will looking forward is so unpredictable but when you look back, it’s unmistakable,’” Holloway says. The pair had been trying to have children before the rig exploded.

“God knew I wasn’t ready for kids because I needed to go through this,” Holloway, now a firefighter and a father, says. “He tested my faith with this. He’s got a plan and He’s going to show me that plan and sometimes it’s going to be hard, and sometimes my faith is going to be tested but I held firm to it and now I have an amazing life. If someone ever told me to count my blessings, it’d be impossible.”

Holloway was able to view the film before its premiere in Louisiana and he’s proud of the work the cast and crew put into the movie and how committed Berg was to telling his friends’ stories with integrity and accuracy.

“They did an incredible job with the movie but throughout the years, I guess I had sugarcoated what really happened to my brothers and my crewmates out there and then to have such a visual of it happening was really hard,” Holloway says. “I was a mess through the whole thing.”

He knows the film will be difficult for others to watch as well but he hopes people see the movie anyway – if only to learn the names of the brothers he lost that night.

“Human life is above anything in my opinion,” Holloway says. “These guys were just out there making a living, sacrificing for their families. I just want people to honor the 11 men we lost and maybe be inspired by these guys who worked hard to provide for their families.”