How to Get the ‘Life You Want’

How far would you go to start living the life God meant for you to live?

That was the challenge presented to attendees of Oprah Winfrey’s The Life You Want Weekend in Washington, D.C., recently. Nearly 20,000 people from all walks of life crowded into the Verizon Center ready to learn how to change their lives and find their purpose.

The first night was all about inspiration.  In a glamorous red gown, Ms. Winfrey recounted the amazing story of her life, from surviving molestation to overcoming racism and sexism as a news anchor.  Through each tragedy she faced, she was eventually able to find God’s plan for her life.

“When I was young,” Ms. Winfrey told the crowd, “I believed that God was my Father and Jesus was my brother. Things tend to work out all right for you when you believe that,” she said to laughter.

One of her most poignant “A-Ha! Moments,” as she calls them, was when she learned to surrender her desires to God. She had become obsessed with Alice Walker’s The Color Purple, and wanted nothing more than to act in the film version, but when she called director Steven Spielberg to inquire about the status of her audition, he told her quite frankly that “real” actresses like Alfre Woodard had also been auditioning for the role. 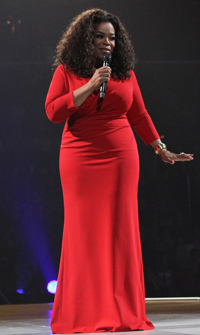 When the reality hit her that she might not get to live this dream, she began to pray that God would help her release her obsession and to make peace with the loss.  Beyond that, she prayed that she would be able to bless Alfre Woodard in the role, when the film came out.

As she recalled the story, she began to sing to the crowd at the Verizon Center, “I surrender all.” And the packed house joined her. “All to Thee my blessed Savior! I surrender all.”  It was one of the most serene, chill-inducing moments in the entire weekend.

Of course, Ms. Winfrey eventually got the role of Sophia in The Color Purple and has gone on to star in and produce many other award-winning films. But what she learned through that experience was that God’s plan for us is not only greater than we could ever imagine, it’s also unstoppable.  What God has for us to do can only be delayed, but never denied.

The message was clear: Believe in the vision God gave you, no matter what forces come against you to discourage you from walking in your truth.

“You become what you believe, not what you wish for. I believed through God, all things are possible. That’s why I’m here.”

Those who victimized Ms. Winfrey as a child, those who dismissed and belittled her as an adult, for each weapon that formed against her, there was a greater weapon, the light of God in her that could not be snuffed out, and the light of God in those who poured into her life and made her light brighter.

That was Ms. Winfrey’s basic challenge to the crowd: “Let your light so shine before men, that they may see your good works, and glorify your Father, which is in Heaven.”

And to drive it home, each participant’s “O Tour Wristband” lit up in brilliant colors, like stars in the night sky, like orbs of beautiful, purposeful, good energy.

“The energy you put out is always coming back to you, whether you know it or not,” she said. “Your greatest power is love.” Show love, be love, receive love; that’s how you get The Life You Want.

By the second day, the energy was overwhelmingly palpable.  We’d received the inspiration and now it was time to “do the work,” as one of Ms. Winfrey’s four “trailblazers,” Iyanla Vanzant, often says on her OWN show, Iyanla, Fix My Life.

The day began with a guided meditation, “Awakening to the Life You Want,” led by trailblazer Mark Nepo, from his New York Times best-seller, The Book of Awakening. “You can have the life you want by being present in the life you have,” said Nepo.

Pay attention to what’s happening around you; be more focused on what you are than what you are producing. That, he said, is when you slip into true meditation with God.

After we connected our minds to God, Ms. Winfrey gave us our first workbook exercise of the day: write your dreams for a loved one’s life.  So easily, people wrote and cried about their dreams for their loved ones when it was much harder to dream for oneself.  Not to worry, Ms. Winfrey reminded us; every good dream we have for our loved ones was coming right back to us.

The next trailblazer to present was phenomenal writer and international best-selling author of Eat, Pray, Love, Elizabeth Gilbert. Her challenge was to remove yourself from situations that are clearly not for you.  “We stay on paths that don’t work for us out of fear. But you have to get to the point where it’s scarier for you to stay than it is for you to move.” Lose fear, she said. Change, move, and see how you’ll grow.

Ms. Winfrey’s second workbook exercise for the audience was to analyze your life as it is today. What are our top priorities and how satisfied are you with how you’re handling them today?

The next time you question why something awful has happened to you, remember, it is an inexplicable miracle that God has given you breath.

You get the life you want, he said, “by embracing the life that you have. The life you have is miraculous.”

To celebrate that miraculous life, SoulCycle director Angela Davis came out to lead the crowd in a 15-minute inspirational exercise adapted especially for the audience to punch out every obstacle in front of us and reach to the sky for our dreams.

Vanzant was the final trailblazer to present and she focused on how to recognize and remove yourself from dysfunction. “Your eyes will adjust to the level of deficiency present in your consciousness.”

Ms. Winfrey closed out the weekend with the third and final workbook exercise: create a new vision for yourself. “Write the vision, make it plain.”

Without a doubt, Ms. Winfrey’s The Life You Want Weekend was total uplift: mind, body and spirit.

What if every person were challenged to dream bigger and do greater things, every week? The world would never be the same.

Her Biscuits Gave This Widow a New Purpose in Life

After her husband died, she thought she’d never cook again.

As 2021 comes to a close, Guideposts pauses to remember some of the inspiring individuals who left us this past year.

Guideposts Classics: Colin Powell on the Value of Dedication

In this story from November 1991, the former U.S. Secretary of State reminds us that whatever we do in life, someone is always watching.